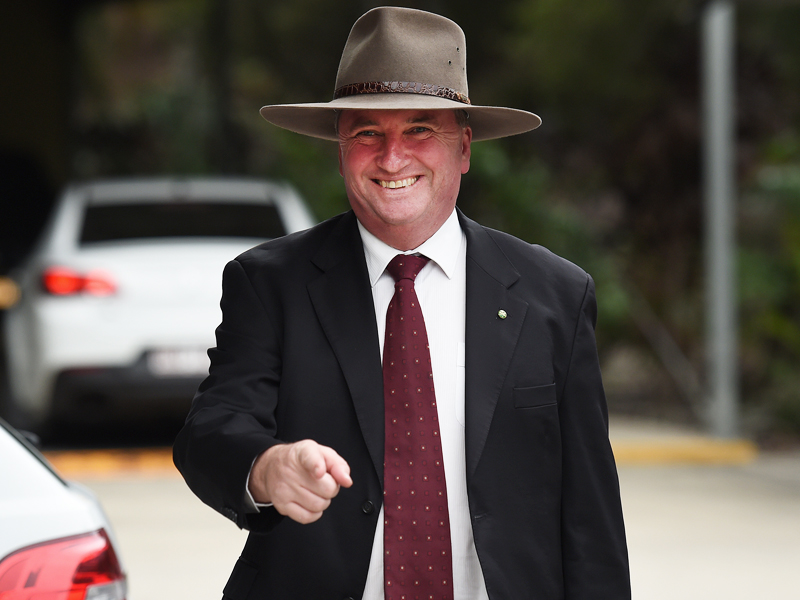 “This was disastrous for us the first time. It‘ll be just as disastrous the second time and, might I remind you, when you closed down the live animal export industry it was around about the same time that we started seeing a lot of people arriving in boats in Australia.”

When questioned by Labor’s shadow minister Joel Fitzgibbon and Greens leader Richard Di Natale, Mr Joyce stood by his suggestion the boat arrivals were retaliation for Australia’s live export ban, which followed the exposure of animal cruelty in Indonesian abattoirs.

The remark quickly reached the Indonesian press. The Jakarta Globe reported on Wednesday night that the comments “pushed Indonesia-Australia relations onto the country’s election agenda”.

Journalist Mark Anning wrote on Twitter it was an “international embarrassment” that the comments had been republished in Indonesia.

Mr Joyce said farmers could borrow $1 million or half of what they owe by accessing concessional 2.71 per cent loans.

“This will keep the bulls from the door and the dignity in their house,” he said.

Setting a floor price for milk was raised by Senator Di Natale but rejected by Mr Joyce and Mr Fitzgibbon.

In a significant exchange about slow and expensive internet in regional areas, one disgruntled member of the audience said to loud applause: “The most I’ll get paying $200 a month is 50 gigabytes of data and 60 gigabytes between one and seven in the morning. So I can wake my kids up, get them to do their homework when there’s lots of data about. That’s what I’m asking. When am I going to get a terabyte of data? According to your plans … it’s never.”

In week three of the election campaign there remains an expectation that the Turnbull government will be returned with a reduced majority.

With the major media polls, Newspoll and Fairfax-Ipsos, showing the Coalition and Labor around 50-50 on a two-party-preferred basis, power will be won or lost in the contest for the most marginal government-held seats.

Analysis of all published marginal seat polling by political analyst William Bowe shows the Coalition now on track to lose a net 11 seats: five in WA, two in NSW, three in Queensland and one in Victoria.

Another forensic (hard cash) assessment is provided by punters as measured by SportsBet where the Coalition is short odds at $1.30 to Labor’s $3.50.

To win government against the Coalition’s 21-seat buffer is a herculean task for Labor leader Bill Shorten.

Although he has performed well, and a memorable gaffe by Finance Minister Mathias Cormann on Wednesday helped to again raise his profile, voter resistance or indifference to Mr Shorten and Labor remains the party’s biggest challenge with less than six weeks to go until polling day.