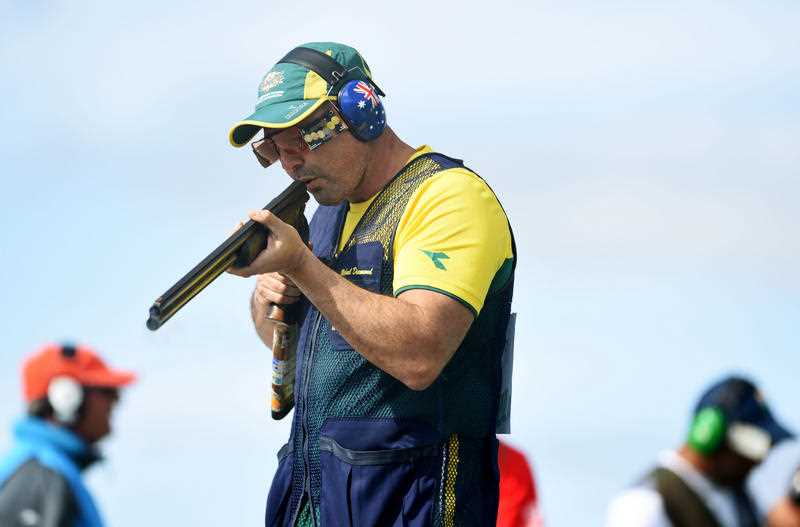 Shooting veteran Michael Diamond is in doubt for his seventh Olympics after being arrested on gun charges.

The 44-year-old dual Olympic gold medallist was arrested following an alleged domestic incident with his brother at Nelson Bay, near Newcastle on Saturday night.

Diamond refused to undergo a roadside breath test when he was stopped at Shoal Bay.

Police also searched his car where they allegedly found a shotgun and 150 rounds of ammunition.

Police said Diamond recorded a reading of 0.159 when he later underwent a breath analysis at Raymond Terrace Police Station.

He has been charged with high-range drink driving, not keeping a firearm safe and using a firearm while under the influence of alcohol.

Diamond was bailed to appear in court next month, while his brother has also taken out a provisional apprehended violence order against him.

Diamond made his Olympic debut in Barcelona, where he finished 11th in the mixed trap event.

He won the Olympic men’s trap in Atlanta in 1996, and successfully defended his title in Sydney four years later before finishing eighth, fourth and fourth in Athens, Beijing and London respectively.

His place at the Rio Games had already been under a cloud, with his selection being challenged by fellow Australian shooter Mitchell Iles.

Iles, 16, is arguing to the Court of Arbitration for Sport that he shot the national federation’s benchmark score of 121 from 125 targets more times than Diamond and fellow shooter Adam Vella.

Diamond in doubt after guns and booze charges