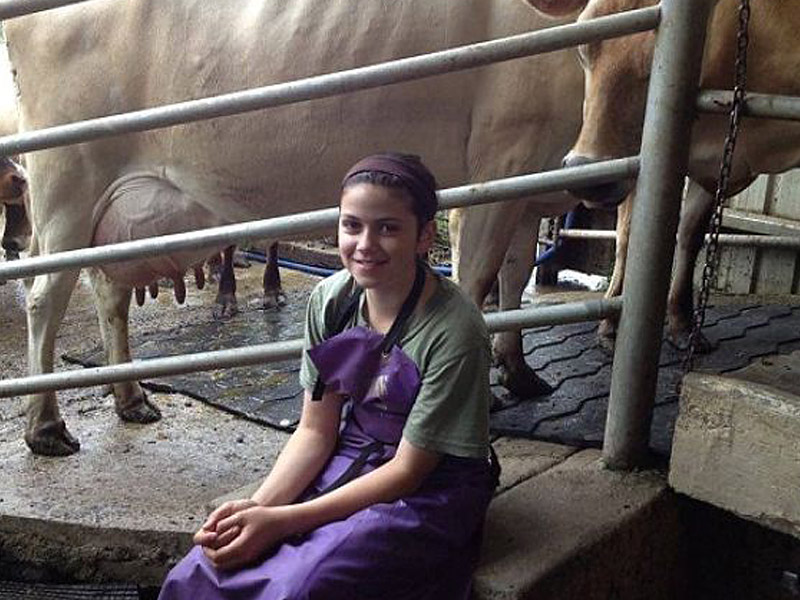 The plight of milk farmers facing a drastic cut in milk payments has sparked a wave of social media support pages and petitions.

Chloe has grown up on dairy farms across Victoria with her family.

Media player: “Space” to play, “M” to mute, “left” and “right” to seek.But the recent milk price cuts have threatened to reduce their lifetime of work to nothing.

“It just has such a massive impact directly, especially on my dad,” she said.

“Dad’s planned out the whole season to go with what he was told at the beginning, which was 55 cents a litre, and now we are down to 14 cents a litre.

Angry, worried, but away at school in Ballarat, an hour-and-a-half’s drive from her family farm near Camperdown in south western Victoria, Chloe felt helpless as her father began sending their milking cows to the meat works.

So she started a petition on Change.org a little more than a week ago, and so far she has gathered almost 80,000 signatures.

“When I started I just thought just see how it goes, maybe get 50 or 60 and just kind of go with it from there,” Ms Scott said.

“[I’ve been] reading through all the comments and seeing such love and support from everyone from all backgrounds.”

Ms Scott said the show of support has come as a surprise to both her and her parents.

Her father, Brendan Scott, said he thought his daughter had been just “walking around school with a clip board getting people to sign a piece of paper”.

“But it turns out it’s a bit bigger than that,” he said.

“I think it’s her way of coping with it and dealing with it.”

Mr Scott, who supplies dairy processor Fonterra, said he has cut into his herd from 120 cows to 70.

He said he has been trimming whatever costs he can in the hope he can hold on.

“There is no choice to exit, if you can continue on, you continue on. If you can’t you can walk away with very little or nothing,” he said.

Mr Scott said the announcement by Coles that it will launch a new milk brand with 20 cents a litre directed to a dairy industry fighting fund was no more than a token gesture by the supermarket which started the milk price wars.

“The supermarkets are big on trying to make food as cheap as they possibly can for the consumer and that’s their business model, but that comes at a price and the people that are paying the price are the farmer,” he said.

“Now if this continues my grandkids won’t be able to buy Australian-grown food or Australian-produced milk, it will be getting imported.”

Chloe said if she was able to meet Mr Joyce she would tell him “it’s just really, really important that he supports the backbone of the country”.

“And just that everyone deserves a fair go no matter what sort what job you’re doing.”

The 16-year-old taking on the supermarket giants