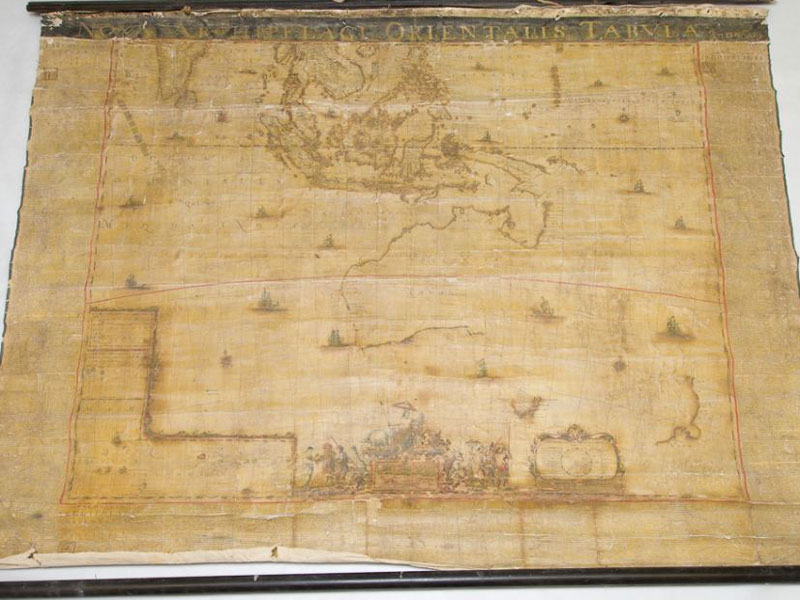 A 353-year-old map of Australia has arrived in Melbourne for restoration.

The wall map – more than 1.5 metres wide and titled Archipelagus Orientalis, sive Asiaticus (the eastern or Asian archipelago) – dates back to 1663 and was created by Dutch master cartographer Joan Blaeu.

Using detailed knowledge of New Holland, New Zealand and sightings of Tasmania by Abel Tasman in 1642, it was the first of its kind.

The map was kept in storage in Sweden until 2010 and the National Library of Australia acquired it in 2013.

The map is expected to be restored within six months by a team of three expert paper conservators at Melbourne University.

“It’s actually in really quite a bad condition and the reason is because it’s a wall map,” Libby Melzer, senior paper conservator, told 774 ABC Melbourne.

“It was designed to hang on the wall.

“It’s been varnished and it’s been exposed to the air and [from] people touching it.

“It’s also had verdigris of a green pigment that’s been used on it that’s been very corrosive, that’s eaten through the paper in a lot of places.”

The use of the verdigris – a copper acetate – on the map was to outline the coastline; that was where most of the paper corrosion had taken place.

“It [the map] was very beautiful so they would have used it to outline all the coastlines,” she said.

“It was printed originally in black and they would have gone [to draw] green around all of the coastlines, but then when they put the varnish on it’s just activated [the copper acetate] and over time it’s just eaten away.”

One of four copies

Just three other copies of the map exist in some form, bound in giant atlases.

The most well-known of them is in the Klencke Atlas residing in the British Library – a gift given to King Charles II in the 17th century.

“It was the first publicly printed map that drew on all the information that the Dutch East India Company had,” Ms Melzer said.

“Obviously they kept a lot of that secret to start with so that they were protecting their trade routes.

“The weird lumpy bit in the bottom right corner is actually New Zealand, so they’ve joined the North and South Island together – they weren’t quite sure so they’ve just filled it in.”

The restoration project will also include piecing the detached parts of paper back together – literally.

See a video explaining the restoration below:

World’s first detailed map of Australia to be restored