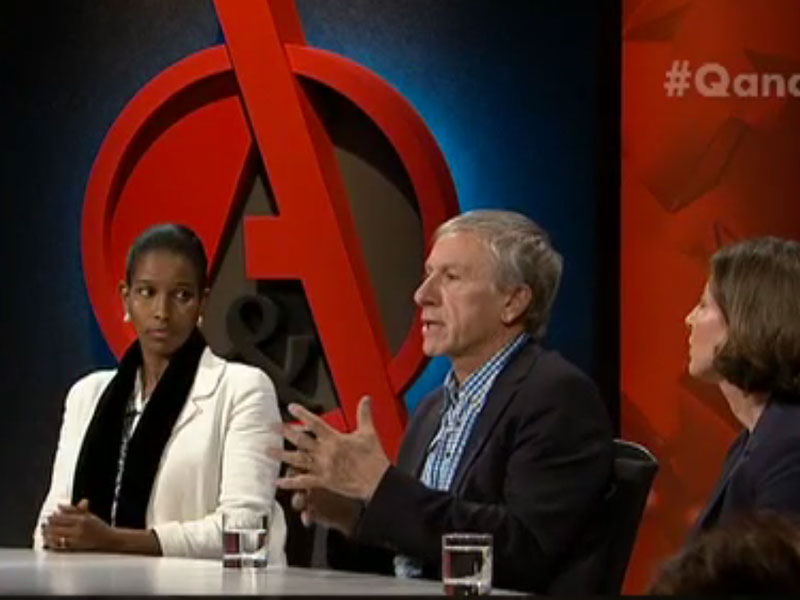 There is a political “over-sensitivity” inhibiting free debate of Islam in the wake of acts of terror, according to philosopher Julian Baggini.

Speaking on ABC panel program Q&A on Monday night, Mr Baggini said some commentators were shying away from being too vocal in the debate.

But some had good reason.

“I have been travelling a bit this year and I go to places like India and speak to Islamic philosophers and a huge number of them say they’re sick of being told how to live by you, sort of, white Western imperialists and we have that imperialist history,” he said.

“I think some of the reluctance of Liberals to be vocal about this is an appropriate understanding that if we’ve made a huge mistake in the past it’s that we’ve been too quick to assume our morality is superior and impose it on people.

“I understand why some people want more vocal support from us and are a bit frustrated by it, but I also completely understand why we have good reasons perhaps for not wading in too heavy handedly.”

The world sees Muslim people through a lens of “victims and victimisation”, which made it difficult to question the religion, according to controversial Somalian feminist and author of Heretic: Why Islam Needs a Reformation Now, Ayaan Hirsi Ali.

Ms Ali said it was not unreasonable to call on the peaceful majority to condemn acts of violence committed in the name of their religion.

“We live in a world where people who identify themselves as Muslims invoke the Quran and invoke the Prophet Muhammad and go around killing people shouting, ‘Allahu Akbar’,” she said.

“I think it is justified for those of us who don’t do that to ask fellow Muslims: ‘what on earth is that about?’

“That is not Islamophobia, that is not unfair, if you share the philosophy, the religion, the tradition … it is making an appeal on your citizenship, on your obligation to this community and I don’t think you should be offended by that.”

People had a “perfect and total right” to question religion, but it should be responsible criticism, Medecins Sans Frontieres co-founder Jean-Christophe Rufin said.

Particularly for young people, ostracising them from society would serve to push them towards extremism, like joining Islamic State.

“The youngsters brought up in our suburbs and who go to Syria and who come back pretending that they are fighting for God but generally speaking they have never opened a Quran – just why they are going back to their religion, or pretend to … insulting them, I repeat, is dangerous.”

“There’s a certain over-sensitivity, this idea, that superior virtue of the oppressed,” he said.

“The Muslim peoples of the world are put in the category of the oppressed, which means you can’t say anything critical of them. I think there’s something of that.”

Religious motivation was not the only cause of “radical acts of violence”, according to award-winning poet and rapper Kate Tempest.

She said “acts of terror” were also being committed but governments, including her own in the United Kingdom.

“There is so much disastrous terror being inflicted globally.”

See more of the debate below:

I’d tweet #QandA but I don’t think I earn enough, and don’t need News Ltd pointing out I was arrested at protest in 95.

Can we talk about the price paid by #CharlieHebdo cartoonists for satire? #qanda

Q&A: ‘You can’t be critical of Muslims’