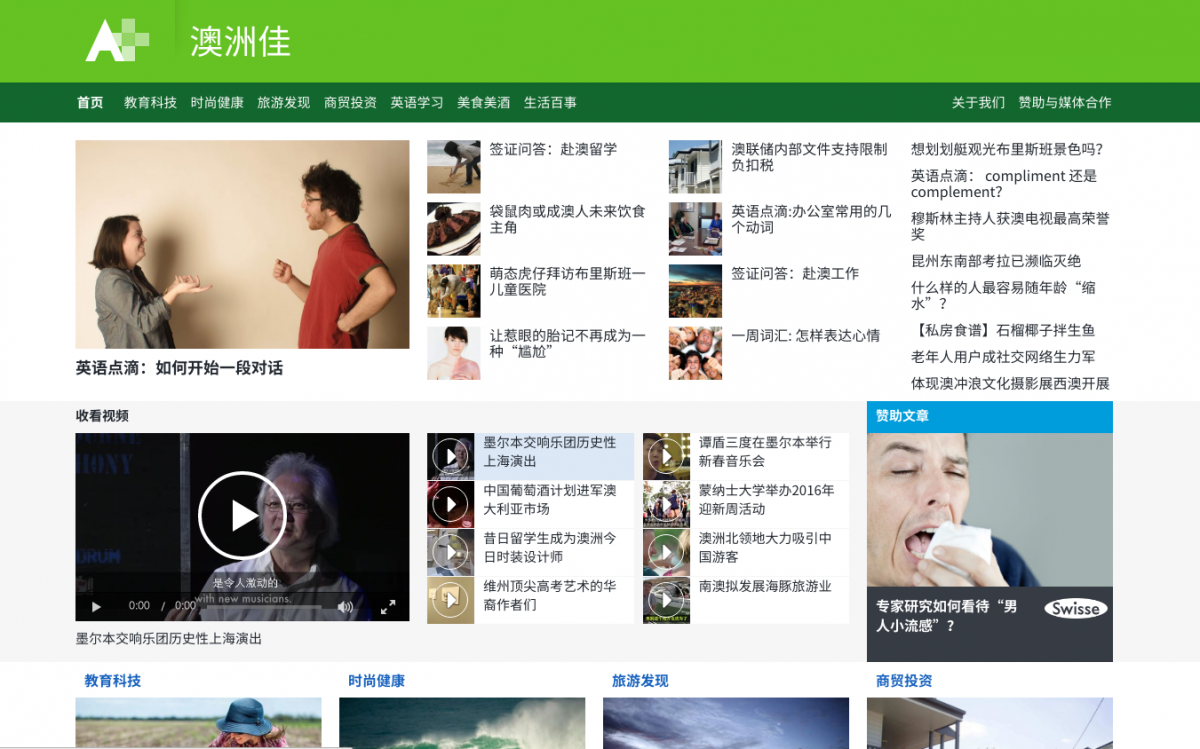 The ABC has been embarrassed by self-censorship in Chinese language news items selected and posted on its AustraliaPlus.cn website.

The broadcaster’s ABC International division recently admitted to Media Watch that the AustraliaPlus.cn website, with online penetration of China’s internet firewall to a potential audience of 700 million people, is actually meant to exclude news and current affairs, with the possible exception of business news.

Published in Mandarin, AustraliaPlus.cn has been operated through its joint venture ABC AustraliaPlus (Shanghai) Cultural Development Co. Ltd. since April 2015. It is taking advertising and sponsorship revenues.

But China watcher, Professor John Fitzgerald of Swinburne University, found the ABC self-censored news items for the China language portal in a practice inconsistent with other uncensored AustraliaPlus services for Vietnam, Burma or Papua New Guinea.

In an email exchange with Media Watch, ABC International chief executive Lynley Marshall acknowledged contentious items highlighted by Media Watch were not posted, in contrast with other news items.

In one question, Media Watch noted AustraliaPlus.cn had posted news stories on Chinese issues in Australia including the Port of Darwin lease to China, attacks on Chinese students in Melbourne, Malcolm Turnbull’s visit, and the Treasurer’s blocking of the Kidman land sale, but had not translated ‘politically sensitive’ items on the Panama Papers, Chinese cyber attacks on the Australian Bureau of Meteorology and Chinese dissident artist Ai Weiwei’s Australian exhibition.

I am frankly disgusted if the ABC censored our #Panamapapers China story in China, as reported on @ABCmediawatch.

ABC International replied to Media Watch questions: “The .cn site is not intended to be a news website or to be presented as such. The stories identified by Media Watch – published and not published – do not fit the aims and intent of the Chinese service.”

ABC International acknowledged that “we did not follow our standard practice for curating ABC content in the items Media Watch has highlighted”. A review of editorial processes and training was underway.

The ABC maintains it has full editorial control of all content. It has declined on confidentiality grounds to release its operational agreement with SMG (Shanghai Media Group).

Professor Fitzgerald told The New Daily the revelation of differing content selection with other foreign language portals posted by the ABC could be described as ‘anticipatory compliance’ in China’s case.

“Certainly China’s president would be highly annoyed if ABC Chinese news reporting covered the Panama Papers. Of course it does not. Then again, PNG PM Peter O’Neill would be thrilled if AustraliaPlus Tok Pisin (Pidgin) decided to pull news articles on his political problems and focused on happy stories instead. It does not. Why don’t we extend to Mr O’Neill the courtesy we extend to President Xi Jinping? We risk creating the impression that Australians are sycophantic bullies: kiss up, kick down,” he said.

Professor Fitzgerald said the ABC would be in a better position to answer its critics if it made its agreement with SMG public.

“In the case of AustraliaPlus.cn I think the ABC has crossed the line. Trade matters, for sure, but so do values. They go to the heart of who we are as a people. Australia can’t afford to have the ABC lose its moral compass.”