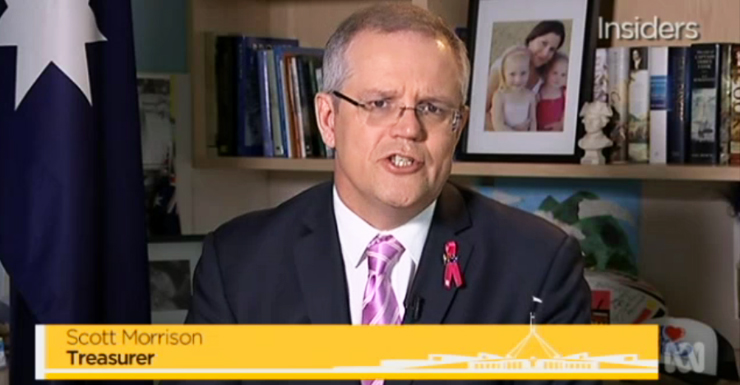 Treasurer Scott Morrison has refused to apologise to Save the Children charity employees after having them removed from Nauru under the cloud of false allegations.

In a tense interview with Barrie Cassidy on ABC Insiders, the program host put to Mr Morrison that he should apologise for both overseeing the decision and for publicly repeating the accusations when he was Immigration Minister. Mr Morrison refused repeatedly.

Mr Morrison argued he did not have to apologise because he made “no conclusions” about the allegations, but simply repeated them while using the word “allegedly”.

The Immigration Department recently agreed to compensate the charity for removing 10 of its workers from the island in 2014 on suspicion of encouraging asylum seekers to self-harm, orchestrating protests and leaking confidential information.

Mr Cassidy, who read from a transcript of Mr Morrison’s comments at the time, did not accept this as true.

The Treasurer did not deny the characterisation, but during a strained exchange stopped just short of an angry accusation.

The Treasurer did not finish this comment, but he did continue to dispute the facts.

“No Barrie, you should go back and check the transcript. I was very careful. I at no time drew a conclusion from it. I said this was the evidence that was presented to me, as there was very serious evidence presented to me about issues of sexual assault in those places which I also asked to be investigated and I’m pleased that those matters have been concluded. I’m pleased we’ve been able to get to the bottom of all of that. This has been a very difficult issue over a long period of time.”

Mr Morrison insisted he was simply doing his job.

“Barrie, those evidences that were presented to me I had investigated fully by a proper process. I did the job I had to do in that situation, just as I’m doing the job now as Treasurer, Barrie.”

The Immigration Department recently admitted it had “no reason to cause doubt to be cast” on the charity’s reputation.

“Although SCA (Save The Children) is no longer providing services for the Department on Nauru, the Department affirms SCA’s good standing with it and acknowledges that at the time of the removal direction and subsequently, it had no reason to cause doubt to be cast on SCA’s reputation,” the department said in a statement.

Labor MP Andrew Giles criticised the Treasurer for his failure to apologise in February.

“The insidious nature of this misinformation is why the government needs to issue an official apology, from the responsible minister,” Mr Giles told Parliament at the time.

The exact amount of compensation paid by the government to Save the Children has not been publicly disclosed.