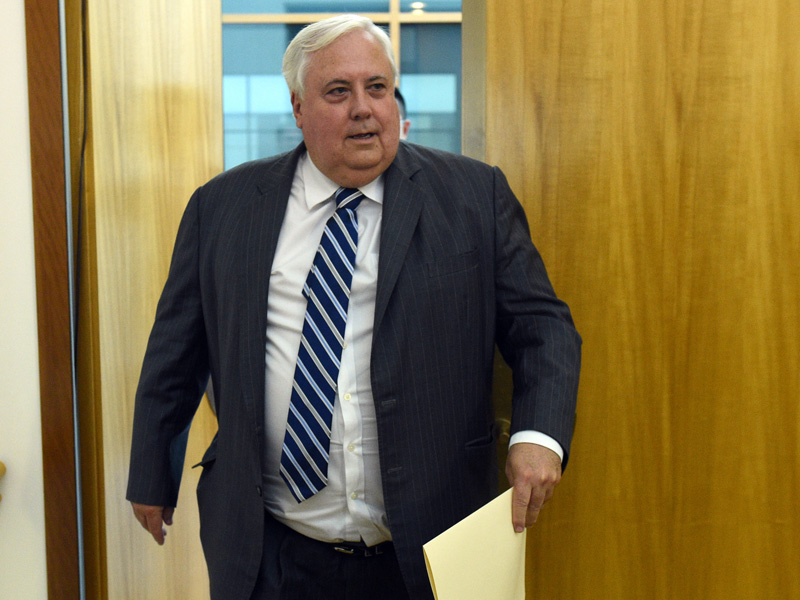 Clive Palmer has left open a run for the Senate after announcing he would not stand again for his federal seat of Fairfax.

The controversial businessman told parliament on Wednesday – days before Malcolm Turnbull seeks a July 2 election – that rather than become a “professional politician” he had decided not to run again in the lower house.

The news was welcomed in the Queensland Sunshine Coast seat Mr Palmer won by 53 votes in 2013.

However, the one-term MP hinted at a Senate tilt, telling reporters in Canberra later he would announce his Queensland team soon and focus the party’s efforts on the upper house at the election.

“That’s where the action is (the Senate),” Mr Palmer said.

“It’s a little bit boring sitting in parliament knowing you’ve got no influence.”

The businessman personally bankrolled his Palmer United Party to gain three senators – two of whom have since quit his group.

“I believe I have the courage today to leave the House of Representatives, satisfied with what Palmer United Party has done and knowing it would have been a different Australia if we hadn’t stopped the 2014 budget and the Newman government in Queensland.”

We can keep the bastards honest as don chipp said. #auspol @PalmerUtdParty pic.twitter.com/XJOROCT8Sy

Mr Palmer criticised the way he had been attacked over his resource business interests.

“Unfortunately politics relies on attacks on individuals and not on sound policy discussion,” he said.

His term in parliament has been dogged by controversy surrounding the collapse of Queensland Nickel, a company he acquired from BHP Billiton.

During his speech to parliament, Coalition MP Ewen Jones – who represents the Queensland Nickel-based city of Townsville – heckled Mr Palmer and held up a sign which read: “Where is QNI workers’ money, Clive?”

Mr Palmer insisted he personally offered millions of dollars to keep the refinery open, but the offer had been rejected.

He intends consulting his wife Anna before making any announcements about his future.

PUP’s West Australian Senate team will be led by sitting senator Dio Wang, while former Tasmanian government adviser Kevin Morgan will be the lead Senate candidate in Tasmania where Jacqui Lambie won under the PUP banner in 2013.