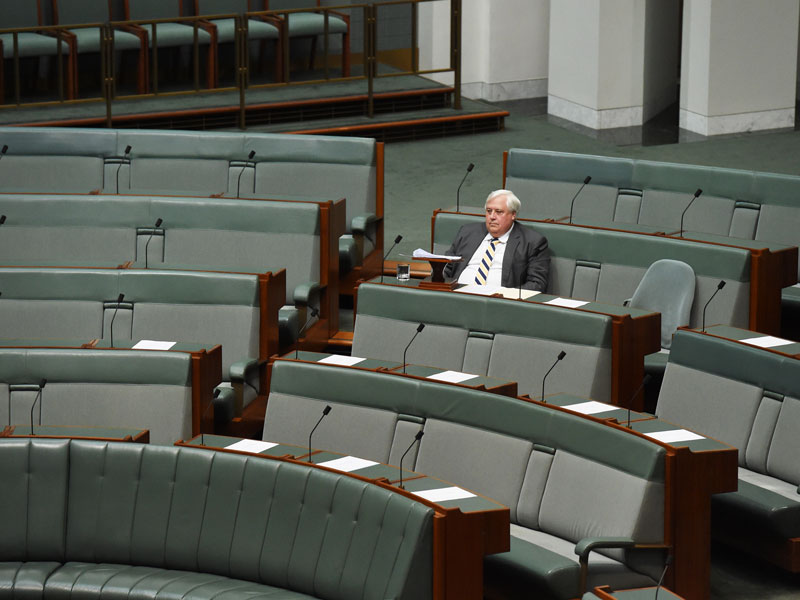 Mr Palmer lashed constant attacks from the media in his valedictory speech to the lower house, while Ms Bishop delivered an ominous final blow to former ally Tony Abbott.

Mr Palmer, the Member for Fairfax, announced his retirement from the lower house on Wednesday afternoon after three years representing the Queensland seat, but did not rule out a tilt at the Senate.

“I have been continually personally attacked over the last three years by the centrally controlled media which is, by its very support for the two-party system, a danger for democracy in this country,” he said.

“All of the so-called scandals and media questions have amounted in hindsight to nothing.”

Ms Bishop also addressed scandals she was caught up in during her time in parliament and called out former prime minister Abbott.

“I was asked to resign [as Speaker] to protect Tony Abbott, someone whom I had assisted and worked with and respected for many years,” she said, ending career of more than 29 years in public office.

“There is much more than meets the eye in that saga, but not for now.”

See the scathing remarks below:

Mr Abbott was not present at the valedictory speech.

Ms Bishop was Speaker of the House of Representatives between November 2013 and August 2015, but resigned after intense public scrutiny of an entitlements claim worth more than $5000 for a helicopter trip between Melbourne and Geelong.

It seemed to create a rift between Ms Bishop and Mr Abbott, long-time friends and colleagues, and continued to the 2015 Liberal leadership spill when Ms Bishop reportedly helped Malcolm Turnbull take on the top job.

Mr Palmer won the seat of Fairfax in 2013, after two recounts put him ahead of LNP rival Ted O’Brien with a margin of 53 votes.

Despite initial popularity, he dropped to almost negligible support in the polls this year, with the Morgan Poll putting PUP at zero per cent support in early April.

Outrage at the handling of his nickel refinery shadowed Mr Palmer over the past few months – more than 800 workers were laid off with more than $70 million in entitlements owed.

He defended his parliamentary and business record in his final speech and called on the public to “respect all those who serve in this place and give up part of their lives for our country”.

“We all have our own race to run, and I believe life is full of opportunities.”

Mr Palmer became known for failing to attend parliament, and was named as the most absent politician two years in a row.

‘This is not the end’

Both Mr Palmer and Ms Bishop indicated it was not the end of their public service.

The Member for Fairfax did not rule out a tilt at the upper house, but said he would have to consult his wife, Anna, before making a final decision.

“That’s where the action is (the Senate),” Mr Palmer said.

“It’s a little bit boring sitting in parliament knowing you’ve got no influence.”

Meanwhile, Ms Bishop described her farewell as a “change of course”.

“It’s not the end … I look forward to serving further,” she said.

More than 20 parliamentarians will retire at the next federal election.