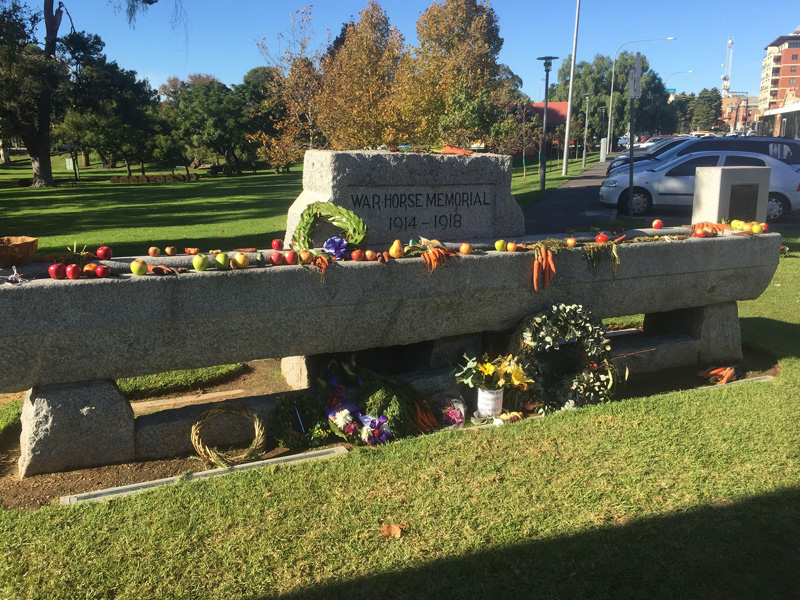 When it comes to remembering the war dead, names like Jezebel, Midnight, Sweetheart and Bill the Bastard are not exactly the first that come to mind.

But following the hundreds of ANZAC Day dawn services across the country, a ceremony with a difference takes place on the corner of North and East Terrace in Adelaide at 8am, acknowledging not just the men and women of the Australian military, but the horses involved in conflict as well.

After the speeches and tributes conclude at the foot of the obelisk memorial dedicated to Australia’s Light Horsemen, attendees then move on to a ceremonial trough into which they lay not wreaths, but bundles of carrots and apples.

The offerings left at the War Horse Memorial are tokens of respect towards the 130,000 plus Australian horses, known as “walers”, that served in the First World War.

It was the last major conflict to feature mounted cavalry before mechanised warfare made the use of horses redundant (Australian horses were also involved in the earlier Boer War).

New technologies employed during the First World War already moved horses to a marginal role in combat, but Australian Light Horse divisions still played a key part in fighting through North Africa, the Middle East and to a lesser degree along the Western Front in Europe.

Fittingly the War Horse Memorial Trough stands but metres away from that of the soldiers who formed such a close bond with the steeds that took them into battle.

National pride, political disputes, strategic objectives – the horses obviously did not understand what they were suffering for, but the war claimed their lives in the thousands all the same.

Even those that survived the fighting did not return home, because of quarantine restrictions enforced to prevent the import of equine diseases into Australia.

Some horses were sold on to the Indian Army, while the rest were shot by the same diggers who had fed, watered, groomed and slept beside their steeds over the course of the war.

One horse did make it back however – Sandy, one of three assigned to the commander of the Australian 1st Division, Major General Sir William Bridges.

When General Bridges was killed by a sniper at Anzac Cove in 1915, Sandy was assigned to Australian Army Veterinary Corps Captain Leslie Whitfield in Egypt, where Sandy remained until being transferred to France in 1916.

It was the dying wish of General Bridges that Sandy be returned to Australia at the end of the war, and luckily for the horse, that wish was granted by Senator George Pearce, Minister for Defence.

In 1918 Sandy was sent from the Australian Veterinary Hospital in France to the Remount Depot at Swaythling in England.

Sandy was turned out to graze at the Central Remount Depot at Maribyrnong, where the horse spent the rest of its days.