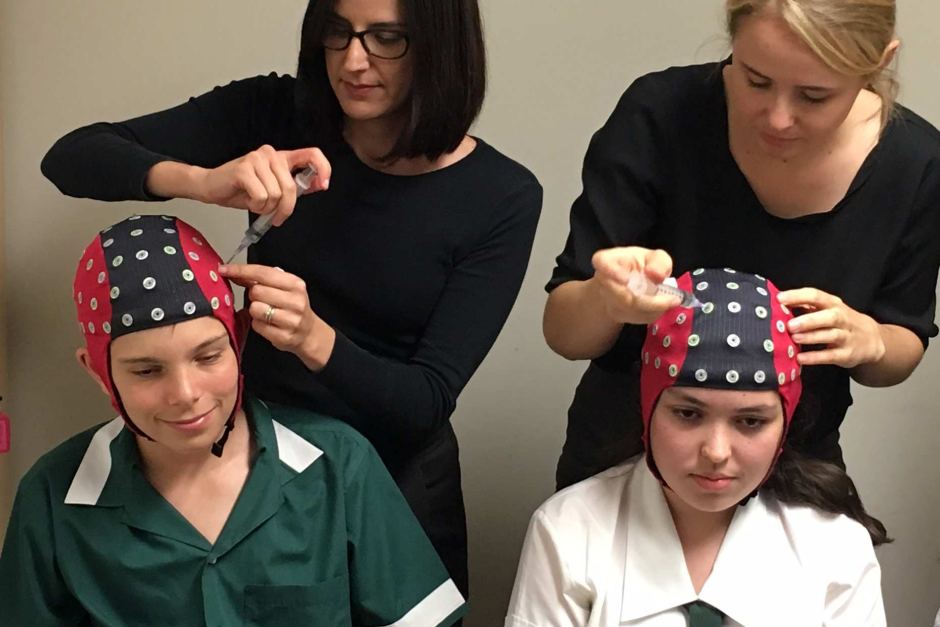 A nationwide research project is underway to gather hard scientific data on which teaching techniques are most effective in Australian classrooms.

Debate over which education techniques work best are argued using mostly anecdotal evidence, with limited statistics to draw upon beyond test results.

Now researchers from around Australia are going to extraordinary lengths to measure classroom success, right down to observing students’ brain activity and heart rates.

In one Brisbane high school it may seem like a Big Brother-style surveillance operation, as students wear wires monitoring their heart rate and brain activity.

As well as this, cameras record their every move.

“It feels really odd when you’re in there,” explained Year 8 student Jess Morgan.

“But after a while you just sort of forget about it and you just start working normally.”

The study is being undertaken by the Science of Learning Research Centre (SLRC) involving eight research institutions as well as the education departments of Queensland, Victoria and South Australia.

The aim of the project is to gather hard scientific data on how students learn.

“For all you know, some of the [teaching] interventions that we put in place have a non-productive outcome – and you want to avoid those,” SLRC director Professor Pankaj Sah said.

“But those [techniques] that do work, you want to have a good reason for doing it, not just anecdotal evidence.”

“What we are trying to do is to actually capture how the students are picking up in science,” project lead Professor Robyn Gilles said.

“Because there are concerns many of the younger students aren’t continuing with science into the later years of high school.”

The teacher at Cavendish Road High was using a technique known as cooperative learning – encouraging student discussion in small groups.

Preliminary scientific results suggest it is working, and the students agree.

“I like to be doing stuff physically and doing it with other people as well in a group,” said student Jack Morris.

Ms Morgan said group discussion does not work for all subjects, but thinks it is a good idea for science.

“I think you get a lot more input from other people and you can generate more ideas,” she said.

Words of praise aside, the school’s principal Corinne McMillan said teachers are prepared to also accept negative feedback as part of the process.

“I guess our teachers are very used to a feedback culture,” Ms McMillan said.

Lessons continue in the laboratory

Another part of the study occurs not in the classroom, but in a laboratory.

Professor Jason Mattingley monitors the brain activity recorded as students solved problems in an experimental classroom at the University of Queensland.

“In the laboratory we can literally look moment-to-moment and work out when the brain is in the optimal state to encode a new piece of information,” Professor Mattingley said.

“In fact we can show that an individual’s brain response nicely predicts whether they’re likely to get that problem correct or incorrect, just three or four seconds later in time.”

Professor Mattingley and his team are trying to understand a mechanism that every teacher or parent would like to know more about – what makes children pay attention.

“Age is a big component, but it can depend on things like the time of day,” he said.

“Most teachers will tell you that that first lesson after lunch is the kind of danger zone of low attention.”

Discoveries made are fed back to schools and could influence changes in teaching practices.

“This provides us with the scientific data,” Ms McMillan said.

“Ultimately what we hope to do is feed that information back to teachers in a way that’s understandable and useful in a classroom setting.”