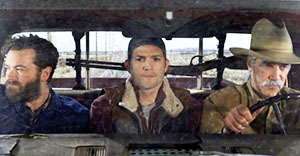 ANALYSIS: Breakfast television has descended into a circus. But this exchange went much too far – even by their standards. Read more

‘This string of scandals has to stop’: Labor’s big move against banks

The Opposition’s announcement could have a huge impact on the big four banks, even if the push for a royal commission is unsuccessful. Read more

Labor takes a risk with declaration of war on big corporations

ANALYSIS: The Opposition is letting Senator Sam Dastyari throw stones at the multinationals. Here’s why it could cost them. Read more

The actresses are fuming after a week of revelations about Hollywood’s ridiculous body standards for women. Read more

This bizarre trick will increase your iPhone’s storage space

We show you how to free up enough extra space on your smartphone for a extra downloads – without spending a cent. Read more

ANALYSIS: A paltry send-off at an unimportant match is a sad way to celebrate the career of a sporting legend

Agencies are failing in their attempts to stop international tax cheats, while calls for urgent action fail to rouse the government. Read more

You might not be as excited about that chocolate bar if the wrapper told you how much exercise you’d need to do. Read more

A That 70s Show reunion features at the centre of this controversial and unique perspective on life in the USA. Read more