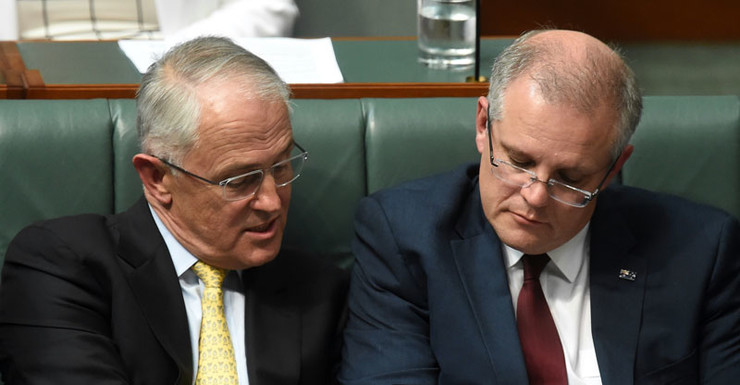 According to The Australian, Mr Turnbull met with treasurer Scott Morrison at his Sydney home on Easter Monday to discuss the strategy, which will cost the government $5 billion.

It was believed the proposal would involve allowing state governments a cut of income tax revenue, to be used to fund hospitals.

The private two-hour meeting was said to prove the Prime Minister and his Treasurer still have a functional working relationship, despite rumours of a rift after Mr Turnbull neglected to advise Mr Morrison his budget would be moved forward due to a possible double dissolution early election.

According to the newspaper, the new proposal will be presented at the meeting of the Council of Australian Governments (COAG) on Friday, and offer state governments a four year deal ending in 2020.

In Joe Hockey’s 2014 budget, the government announced a massive $80 billion in health and education cuts over the next decade – a huge blow to the former Abbott government’s popularity.

“On one end of the spectrum we’ve got Bob, who supports the Government the vast majority of the time.

“At the other end of the spectrum we’ve got someone like Glenn Lazarus who supports Labor and the Greens the vast majority of the time.”

It was thought Mr Turnbull knew the cuts were an important election issue, and had been struggling to find a solution to the problem amid resistance from his party room, including Mr Morrison.

Aside from hopefully placating Australian state premiers, the move was expected to be seen as a show of unity between the Prime Minister and his Treasurer, after last week’s damaging speculation that Mr Morrison had been shafted from Mr Turnbull’s ‘inner circle’.

Mr Turnbull and Mr Morrison will dine with the state premiers at The Lodge on Thursday night.

$5b ‘bandaid’ for nation’s hospitals

Meanwhile, state and territory governments have had early discussions with the Commonwealth on a funding olive branch for the nation’s hospitals, South Australian Premier Jay Weatherill confirmed.

Mr Weatherill had been one of the most vocal critics of the cuts, and split with his party by suggesting an increase to the GST could be a solution to the revenue shortfall.

“We haven’t had the details yet, but there is talk that there will be an offer — and there needs to be,” Mr Weatherill told ABC’s AM radio program.

“I’ve had a preliminary call, but the detail is apparently going to emerge during the course of the week.

“It will be a $5 billion bandaid in what we estimate to be a $57 billion problem.”

It comes as the SA Government released modelling showing the funding cuts would put extra pressure on the state’s already overcrowded public hospital system and lead to more than 50,000 patients not receiving adequate treatment.

“Survival is a wonderful thing, it concentrates the mind — especially in the lead-up to an election,” Mr Weatherill said.