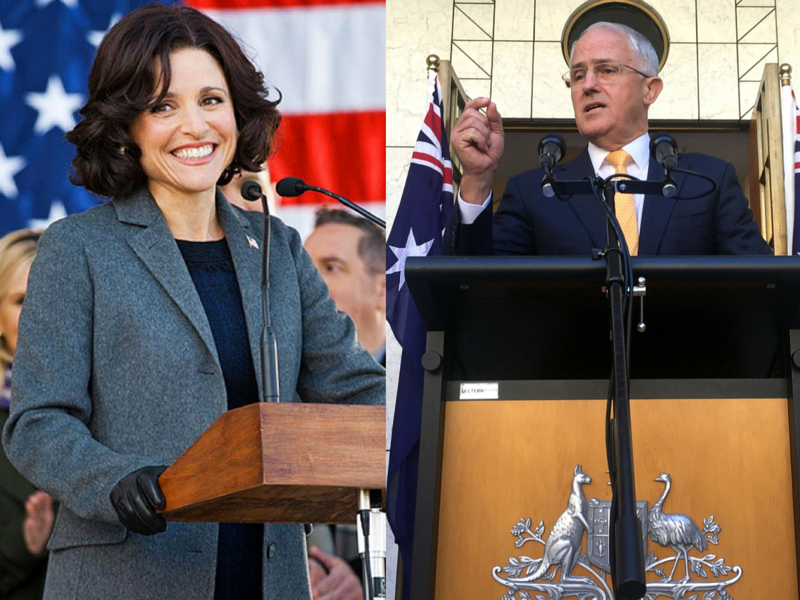 Malcolm Turnbull’s latest political slogan appears to be embarrassingly similar to one coined by the popular American political satire, Veep.

The words “continuity and change” have been used by both Prime Minister Turnbull and Employment Minister Michaelia Cash, as they sought to play down the latest intervention from dumped PM Tony Abbott.

On Wednesday, actress from the US hit comedy, Julia Louis-Dreyfus, posted a tweet in response to the federal government borrowing the catch phrase, saying she was ‘dumbstruck’.

• Why Mad as Hell is winning Aussie politics
• PM moves to force an early election
• What is a double dissolution?

The “continuity and change” slogan is almost identical to the one printed on the side of the campaign bus of fictional United States president Selina Meyer, played by Louis-Dreyfus.

In a Sky News interview on Monday, Mr Abbott said he would have no problem campaigning for the man who caused his downfall, because Mr Turnbull would be running on the Abbott government record anyway.

It was a point Mr Turnbull tried to dispute in a series of Tuesday morning interviews, while he attempted to highlight the concept of continuity with the past while simultaneously stressing change.

“As I said earlier today there is continuity with change,” Mr Turnbull told Neil Mitchell on 3AW radio.

“Broadly speaking there is therefore strong continuity but also change as you get with any Prime Minister,” he later said.

Mr Turnbull said the phrase or a variation of it four times within two minutes in the Mitchell interview.

He also used the phrase on Monday night during an interview with Leigh Sales on ABC’s 7.30 program.

“Of course, I was part of his [Mr Abbott’s] government, part of his Cabinet but there is also a great deal of change. So, as you go from one Liberal Prime Minister to another, you have continuity and you have change and there has been a lot of change,” he said. During the Veep episode Ms Meyer was running for re-election and became jealous of the positive reaction the press gave to her running mate’s charm.

“Selina Meyer: Continuity with Change,” the sign read in an episode from May 2015.

The catchphrase remained a part of the Meyer campaign through to election night, with the hapless politician using it at the final rally.

Ms Cash and Finance Minister Mathias Cormann have also been heard using variations of the phrase.

The humorous coincidence (or was it?) wasn’t the PM’s first brush with American political television this week.

After announcing he would recall parliament early to debate the ABCC and Registered Organisations bills – which brought Australia one step closer to a double dissolution and early election – House of Cards‘ Twitter account posted to Mr Turnbull.

It seemed the program’s account, which tends to tweet in the character voice of lead political hard-man Frank Underwood (Kevin Spacey), was impressed at Mr Turnbull’s ruthlessness. Star from US comedy ‘dumbstruck’ Turnbull lifted her slogan