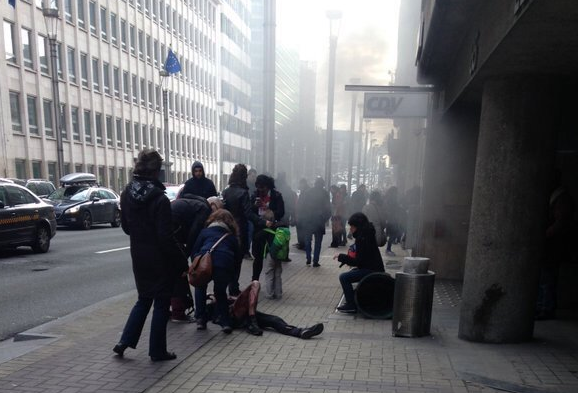 A photo from outside Maalbeek station showing smoke. Photo: Twitter

‘This was no coincidence’: why Brussels was in the firing line

The ‘political capital’ of Europe has been brought to a standstill after a series of terror attacks. And to many, it was not a surprise. Read more

Finally, Apple gives in to demand, releases an affordable iPhone

Find out exactly what the brand new iPhone SE can do, how much it costs and exactly when it’s due to arrive in Australia. Read more

Hang on a second. We’ve heard Turnbull’s new slogan before

The Prime Minister’s three-word ‘continuity and change’ line is nothing new. It’s a long-running joke from this hit US comedy. Read more

Supernova snapshot: this is what it looks like when a star dies

For the first time, scientists have witnessed the early moments of the death of a large star. Here’s what they saw. Read more

‘Boaty McBoatface’: what happens when you let the net decide

It was meant to bring the public into the serious business of naming a scientific research vessel. Online voters had other ideas. Read more

Malcolm Turnbull could dissolve the govt to bring back the ABCC. But his claims about its importance are questionable, at best. Read more

The socialist senator vying to become the next president of the United States has received a boost in support from an unlikely location. Read more

Aussie could be victim of a ‘Russian stitch-up’, says former champ

Lucas Browne’s meteoric rise to heavyweight champ took many by surprise. His positive drug test might not be the end of the story. Read more