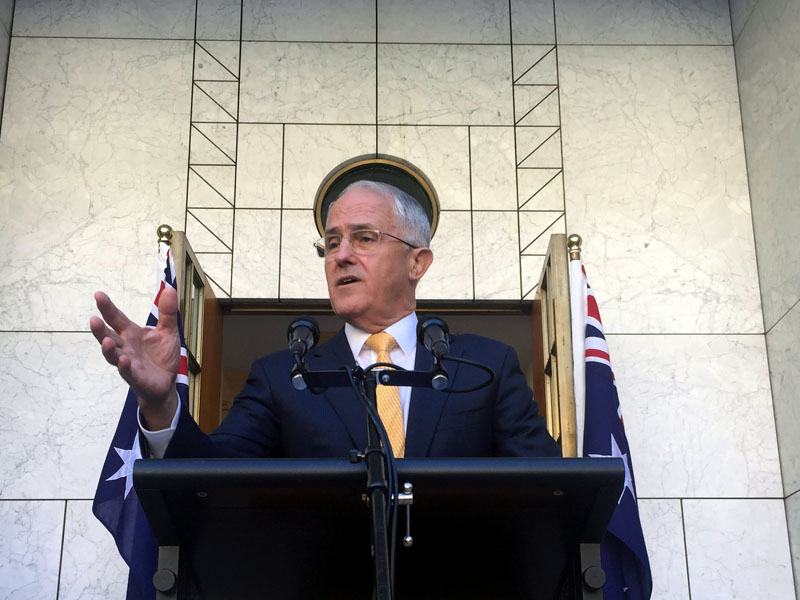 The latest polling, released just hours after the prime minister signalled his move towards an early election, shows Labor ahead of the Coalition, despite Opposition Leader Bill Shorten’s ongoing unpopularity with the electorate.

The Morgan Poll put the Australian Labor Party (ALP) ahead of the Coalition 50.5 per cent to 49.5 per cent on a two-party preferred basis, on the same day Prime Minister Malcolm Turnbull recalled both houses of parliament for a joint sitting on April 18 to deal with two bills targeting alleged union corruption.

Parliament will consider the Australian Building and Construction Commission (ABCC) and Registered Organisations Amendment bills and if they do not pass the Senate, the PM will call double a dissolution election for July 2. The federal budget was also brought forward to May 3.

What is a double dissolution election? Click here to find out

“The reason it is special is because all of the senators go up for election instead of just half.

“When [the Upper and Lower houses] can’t agree, when they persistently can’t agree, there has to be a mechanism for breaking that deadlock.”

• Shorten’s pitch to win over the young and their parents
• Morrison painting a false picture of negative gearing
• Coalition slips behind ALP: poll

Labor, the Greens and some cross-benchers are opposed to the bills and have already voted against them. Just one of eight cross-benchers, Family First Senator Bob Day, indicated they would support the current ABCC bill.

Others said they would be willing to consider it if amendments were made. At least six must support it for it to pass.

Opposition Leader Bill Shorten said the ALP would not engage in a “union bashing” campaign and described the Prime Minister as being in “full panic mode”.

The Senate will have three weeks to pass the proposals into law or face a double dissolution election.

“The time has come for the Senate to recognise its responsibilities and help advance our economic plans, rather than standing in the way,” Mr Turnbull said at a snap press conference on Monday morning.

Earlier, Treasurer Scott Morrison insisted the budget would be held on May 10, the day originally set down for the fiscal plan’s unveiling.

But an hour later, Mr Turnbull announced it would be brought forward one week. Mr Morrison later told reporters he only found out about the move “at the cabinet meeting this morning at 10”.

“Previously people asked me: ‘What day is the budget?’ May 10, that’s what it was until I was advised this morning that it will be on May 3,” he said.

Shadow Treasurer Chris Bowen said this was the first time the budget had been brought forward since 1952, and Treasurer Scott Morrison had been “thrown under the bus” in the process.

“The Treasurer has been completely emasculated and has no influence over tax policy or even the timing of his own budget,” Mr Bowen said.

But Mr Turnbull denied the decision had caused friction with the Treasurer and told ABC TV they were on “excellent” terms.

Senator Nick Xenophon said he would support a second reading of the bill, but wanted to move a series of amendments.

“If you thought last week was ugly in the Senate, you ain’t seen nothing yet,” Mr Xenophon said.

“It’s a nifty and cunning manoeuvre on the part of the PM but I suspect it will cause fireworks in the Senate from April 18.”

Senator David Leyonhjelm on Monday described the Prime Minister’s announcement as “an ambush”.

“What’s keeping Mr Turnbull up at night is not about how to return the budget to surplus … he is purely and utterly worried about when to call the election so he can keep his job,” he said.

APRIL 18
Both houses return to Canberra for three weeks to debate the bills.
Failure to pass the bills will give the government a double dissolution trigger

MAY 3
Treasurer Scott Morrison will hand down the 2016 Budget, seven days earlier than previously scheduled.

MAY 11
Deadline day for Mr Turnbull to call a double dissolution election.

JULY 2
The election will be held on this day if the union bills are not passed.