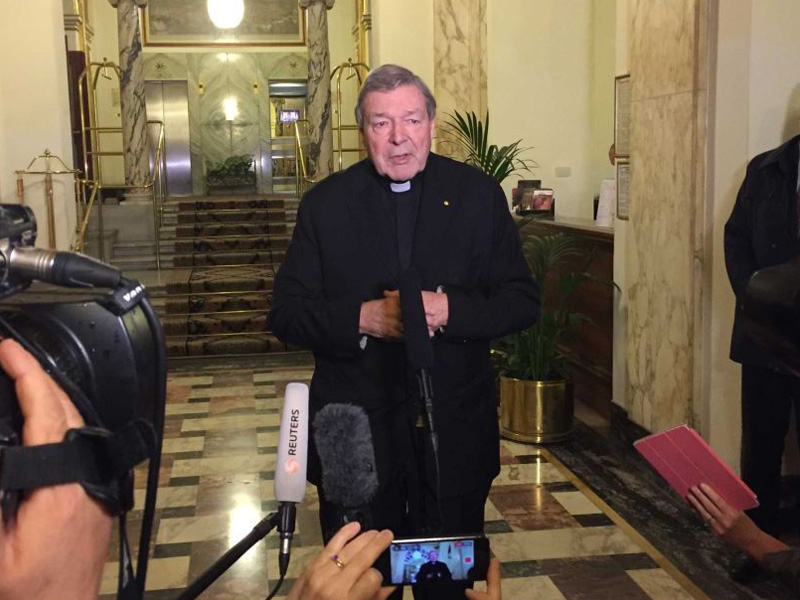 Cardinal George Pell has told the child abuse royal commission it was a “disastrous coincidence” that five paedophile priests preyed on children in Ballarat during the 1970s, as survivors accused him of lying.

Cardinal Pell fronted the child abuse royal commission for a fourth day and final day via videolink from the Hotel Quirinale in Rome.

The Vatican’s finance chief was questioned extensively on what he knew about the actions of several paedophile priests, including “about four or five” who operated in the Ballarat diocese, including Gerald Ridsdale and Edward Dowlan.

• ‘I suggest you are lying to protect your reputation’
• Pell jeered by abuse survivors
• Pell: ‘It wasn’t of interest to me’
• ‘I’m not here to defend the indefensible’

When asked why there had been “so many child sexual abusers aggregating in Ballarat East in the 1970s”, Cardinal Pell said it was a “disastrous coincidence”.

“I wouldn’t for a minute think that [the Christian Brothers] put all these people together for a specific purpose,” he said.

Speaking outside the hotel, survivors said they doubted Cardinal Pell was telling the truth.

“The Ballarat survivors came to Rome to hear truth and honesty from George. We feel we have been deceived and lied to,” survivor Philip Nagle said.

“The royal commission at some stage in the future will give a recommendation on the evidence given by George.

“We feel George has not been honest nor truthful. George will have to live with this chosen course.”

The survivors stopped short of calling for Cardinal Pell to resign.

“It never has been all about Pell,” another survivor, Peter Blenkiron, said.

“We’ve watched the evidence that’s been presented … in all the other case studies by the other clergy. There’s a pattern right across the board that denial is always around [the offences].”

The Ballarat survivors have been in talks to arrange a meeting with Pope Francis, which may happen as soon as Friday.

Speaking outside the hotel after giving evidence, Cardinal Pell said he hoped the past four days had “contributed a bit to healing, to improving the situation” and that he would meet with some of the survivors tomorrow.

The commission earlier heard Cardinal Pell had received information from a student at Ballarat’s St Patrick’s College in the 1970s that Dowlan was “misbehaving with boys”.

Cardinal Pell said he had inquired with the school chaplain about the complaint but did not take it further.

“With the experience of 40 years later, certainly I would agree that I should have done more,” Cardinal Pell said.

“There was no specifics about the activity, how serious it was, and the boy wasn’t asking me to do anything about it, but just lamenting and mentioning it.”

Justice McClellan asked: “Why was it necessary for people to ask you to do something rather than for you to accept the information and initiate your own response?”

Cardinal Pell said he was not as aware of his obligations at that time, when he was a young cleric, as he was later on.

He was also asked to address many of his previous statements, including comments he made on day two of his testimony, in which he said talk of Ridsdale’s crimes was “not of much interest to me” at the time.

“I remember messing up this sequence completely. I regret this choice of words. I was very confused, I responded poorly,” Cardinal Pell said.

“I have never enjoyed reading the accounts of these sufferings and I tried to do that only when it was professionally and absolutely appropriate, because the behaviour’s abhorrent and painful to read about.”

When asked why he walked to court with Ridsdale in the 1990s, he said it was because it was the Christian thing to do.

“I walked with him following the Christian conviction that it’s an appropriate activity to be kind to prisoners,” he said.

When it was suggested he was “lying” about his knowledge of complaints against Ridsdale in the 1970s and 1980s “to protect [his] own reputation”, the Cardinal said the allegation was “baseless”.

“I’d say that is completely untrue and unjustified by any evidence,” he told the commission.

He was also asked again about Father Peter Searson — a parish priest in Doveton, Victoria, in the 1980s — and his abuse of Julie Stewart.

The inquiry heard Searson was the subject of numerous complaints, including that he frequented the boys’ toilets, taped confessions, and made children kneel between his legs.

It also heard he brandished a handgun, and on one occasion killed a bird with a screwdriver in front of young children.

Cardinal Pell wrote an apology to Ms Stewart in 1998, when he was Archbishop of Melbourne.

The inquiry heard Ms Stewart had been unable to enter a confessional box after the abuse she suffered at Searson’s hands.

“One of the other things I regret as a Catholic priest is the damage that these crimes do to the faith of survivors, of the victims and their friends and family and generally throughout the society,” Cardinal Pell said.

Cardinal Pell’s own counsel presented evidence that the Cardinal eventually removed Searson when he was Archbishop of Melbourne, giving him the option to “retire and resign”.

Cardinal Pell said Rome did not back him when he told Searson to resign, but added: “I just ignored the Roman decision, and Rome didn’t push the point.” So many paedophile priests a ‘disastrous coincidence’: Pell