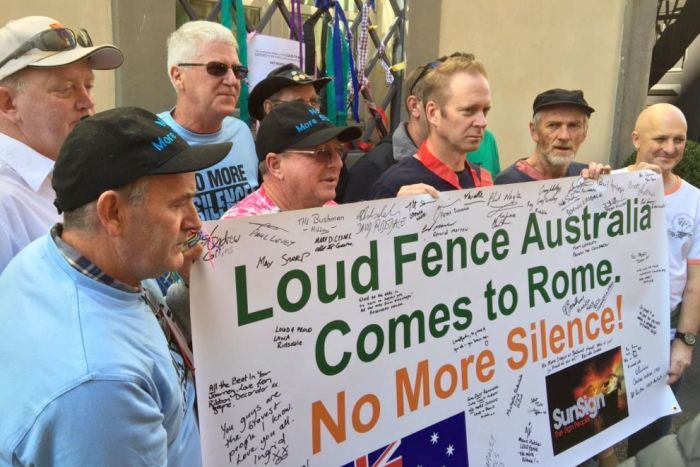 Cardinal George Pell has wrapped up his third day of giving evidence in Rome, as survivors say they are “fed up” with him and want to meet with the Pope.

Abuse survivors from Ballarat were to meet with the Cardinal during their time in Rome, but pulled out today when conditions of the meeting were revealed.

The group of survivors took this to indicate a gag order, although this has not been confirmed by the church.

• Pell: ‘It wasn’t of interest to me’
• ‘I’m not here to defend the indefensible’
• Pell testimony: what to expect
• Pell may never come home
• Another song for Cardinal Pell recorded

“The fact that we can’t have support staff reflects his total misunderstanding of post-traumatic stress disorder,” one Ballarat survivor said after the hearing.

Another survivor told reporters: “We wanna be heard and we want someone to show they care about us.”

For the third day in a row, Cardinal Pell gave evidence at the Royal Commission on Institutional Responses to Child Sexual Abuse, denying that the Church’s current structures needed to change in light of the revelations.

At the beginning of the hearing, Cardinal Pell said he was told of “general” accusations relating to Brother Edward Nolan, but did not know of specifics.

The Cardinal said he wasn’t concerned that Brother Nolan was being moved around from parish to parish.

“Forty years ago, I didn’t think that was unusual or inappropriate,” Cardinal Pell told the commission.

He was then asked: “Do you mean it wasn’t inappropriate to move them around to a new place where they may reoffend against different children?”

In which Cardinal Pell replied: “No, my whole assumption … was that the brothers would be dealing adequately with the matter”.

As the hearing continued, Senior Counsel Gail Furness pushed the Cardinal as he maintained he did not know about any of the paedophile priests mentioned.

“So we now have the CEO deceiving you and the Archbishop deceiving you and concealing information from you as well as Bishop Mulkearns and one or more of the consultors in the Ballarat Diocese?” Ms Furness probed.

“That is correct,” replied the Cardinal.

Yet, earlier in the hearing Cardinal Pell did admit he should have attempted to know more about why priests such as Brother Nolan were being moved.

“I should have consulted and made sure the matter was properly treated,” he said.

During the hearing, a number of cases were raised in which priests were announced to have retired due to “ill health”, rather than because they were paedophiles.

“We dealt with this problem … 20 years ago,” the Cardinal of Melbourne Response, an organisation Pell was involved in setting up, said.

Thursday’s hearing will begin at 7am (AEDT), after the Cardinal agreed to an extra hour of evidence.

According to the ABC, the commission will next call on Ronald Mulkearns, the then bishop when Cardinal Pell was working in Ballarat in the 1970s and ’80s.

Cardinal Pell spent much of the first day of evidence laying blame on Mr Mulkearns, who he said was aware of paedophile priests and shifted them from parish to parish without reporting them to the police.

Pell jeered by abuse survivors on day three of hearing