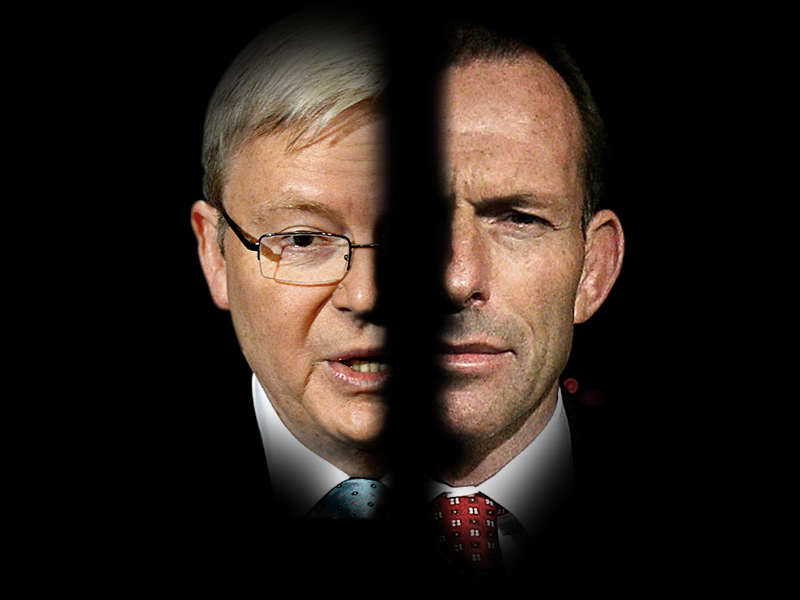 In doing so, Mr Abbott all but dispelled any doubt he is deliberately making life difficult for Mr Turnbull. What is not yet known is whether Mr Abbott has serious delusions about regaining the prime ministership or is simply a vengeful wrecker.

Perhaps aside from his staunchest supporters, most Australians wanted to take the vanquished MP at his word back in September when Mr Abbott promised not to snipe from the sidelines or undermine his replacement.

Most of us could sense the ghost of One K-Rudd hovering at the back of the media scrum that day, evoked by Mr Abbott in deed if not by name as the epitome of bad sportsmanship that he was apparently refusing to emulate.

Even until recently, many of those same voters would have still been prepared to give the Member for Warringah the benefit of the doubt. They may have been willing to attribute his spirited defence of totemic conservative issues to the oft-mentioned need for the Liberal Party to accommodate a range of political values and beliefs.

The speech in London, calling for European nations to close their borders against asylum seekers, may have been seen by such voters as Mr Abbott relying on one of his government’s limited number of achievements – “stopping the boats” – to slow the rate of his rapidly shrinking sphere of influence.

A subsequent speech defending the sanctity of heterosexual marriage, and a newspaper column calling for a revolution within Islam were more pointed interventions. Not only did Mr Abbott’s provocative comments guarantee the conservative perspective on these issues remained prominent in the public debate, but they emboldened other conservatives to publicly join the fray.

Inconveniently for PM Turnbull, the more that conservative Coalition MPs freelance on a range of policies and issues, the more the government looks to voters like an ill-disciplined and unmanageable rabble. And at some point it is possible voters will begin to see not only the similarity between Tony Abbott and the vengeful Kevin Rudd, but the Turnbull government and the omnishambles that was the Rudd and Gillard regimes.

Mr Abbott would be foolish to deny any awareness of this implication. In noting after losing the leadership that he would not be a wrecker, the ex-PM was acknowledging that to be one would damage the government.

Yet he has persisted, using speeches and other public statements to put pressure on Mr Turnbull to take a range of policy actions that Mr Abbott already knows are “courageous” – that is, politically suicidal in the current electoral environment.

Mr Abbott has suggested Mr Turnbull needs to go hard on industrial relations reform, even though the union movement has proven to be a formidable grassroots campaigning force and is itching for the opportunity to destroy anything that resembles a resurrected WorkChoices.

And just this week he applied the screws to the Prime Minister on economic leadership – the key point of differentiation that Mr Turnbull drew between himself and Mr Abbott when he announced he would challenge for the prime ministership.

Mr Abbott is trying to rewrite history by claiming, as he has reportedly done this week, that his 2014 budget was simply misunderstood, he should get credit for its “bravery”, and PM Turnbull must show economic leadership by adopting a similar slash and burn approach to government spending.

In reality, the 2014 budget was neither brave nor economically sound, given it made the poor and weak shoulder the burden of economic repair and did nothing to arrest the growth of middle-class welfare and perks for the rich.

It was also built on a convenient lie, the debt and deficit budget emergency, which was unceremoniously discarded by then PM Abbott and Treasurer Joe Hockey in the 2015 budget – the ultimate coward’s budget that did nothing for fear of further upsetting voters.

Nevertheless, Mr Abbott reportedly stood in the Coalition party room on Tuesday, claiming the upcoming budget should have no tax increases at all, and calling on the leadership (that is, the Prime Minister) to “take on the savings challenge again”.

Some MPs have reportedly said this makes it “practically impossible” for the government to cut negative gearing concessions. This suggests Mr Abbott is attempting to wedge Mr Turnbull between the economic dries in the Liberal Party who see any tax increase (or cut in tax concessions) as economic irresponsibility, and voters who want to see the government equitably raise the revenue needed to adequately fund services.

However another parliamentarian, Turnbull supporter Russell Broadbent, is reported to have cautioned the Coalition party room against resisting necessary reforms, telling colleagues they should back the leadership instead of shying away from difficult decisions.

However it may take someone with greater influence over the conservatives than Mr Broadbent to bring Mr Abbott into line. Someone perhaps like Mr Abbott’s political mentor, John Howard, who appeared in a television interview on the ABC’s 7.30 on Tuesday night, and who made it clear during the interview that personalities were far less important than retaining government.

“Tony Abbott had my strong support while he was there and now Malcolm Turnbull’s there he will have my strong support,” said Australia’s second-longest serving Prime Minister, who also added that his “operating principle” was “to keep the Labor Party in opposition”.

Mr Howard went on to remind “all Liberal supporters” of “the validity of that operating principle”, stressing there was no such thing as an unloseable election, and it was always a good idea to remember that any government can be defeated.

Of course, Mr Abbott would only heed this wise advice if he didn’t want the Turnbull government to lose the next election. Abbott is preparing for a not-so-civil revolution