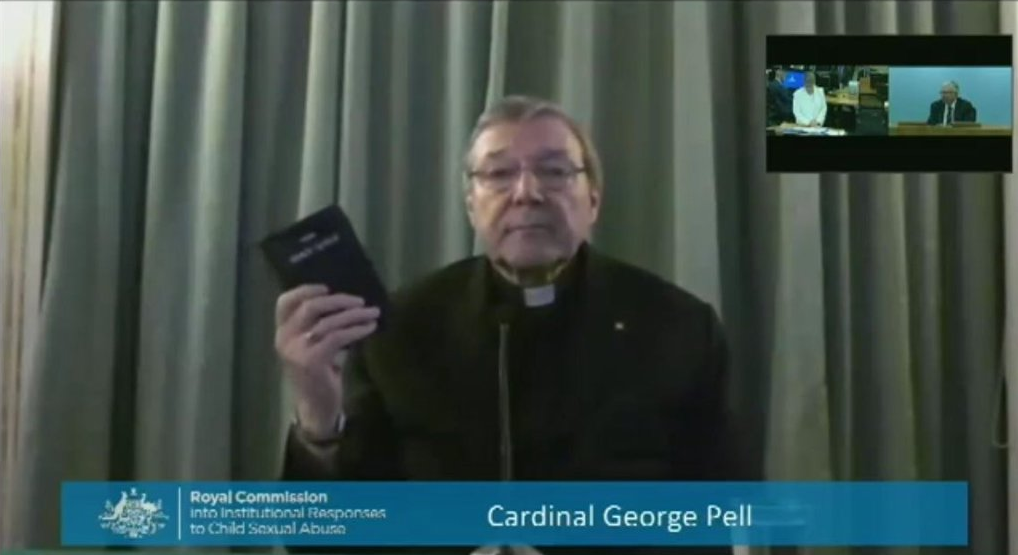 The Catholic Church made “enormous mistakes” and “let people down” in its handling of child sexual abuse by priests, Cardinal George Pell told the child abuse royal commission this morning.

Australia’s most senior Catholic testified via video link from a hotel in Rome, giving evidence about Catholic abuse in Ballarat and Melbourne.

He said he was “not here to defend the indefensible”, and admitted children at the time were unlikely to be believed if they had come forward with allegations of abuse.

When asked if the general attitude of the church was to not believe a child, he said it “certainly was much, much more difficult for the child to be believed then … the predisposition was not to believe”.

“They were very, very, very plausible allegations made by responsible people that were not followed up sufficiently.”

Cardinal Pell also said the instinct was to protect the church in response to allegations.

“At that stage, the instinct was more to protect the institution, the community of the church, from shame,” he said.

Child abuse survivor Tim Lane said he was less than impressed with what Cardinal Pell told the commission.

“It’s all about still sort of passing the buck a little bit, can’t remember and all those things,” he said.

“But I remember as a four-year-old, I’m 44 now, and that was 40 years ago. Very clear and vivid. These guys were priests in their 20s and that, and they can’t recall and can’t remember? Well, the whole world ain’t that gullible.”

Cardinal Pell was called to give evidence about two case studies — number 28 about the Diocese of Ballarat and number 35 about the Archdiocese of Melbourne.

The time frame for the case studies stretches from the 1960s through to the 1990s.

Case Study 28 deals with the response of the Christian Brothers in Victoria to allegations of child sexual abuse involving six brothers, all of whom spent time working at schools in the Diocese of Ballarat.

When asked if he had been approached by students with complaints of inappropriate touching by teachers or principles, Cardinal Pell said he could not recall any examples.

“I don’t remember any such thing happening and therefore I don’t believe it did but my memory is sometimes fallible,” he said.

The royal commission has also heard evidence from Gerald Ridsdale, a former Ballarat priest who was convicted of 138 offences against children, involving 53 victims.

His nephew David Ridsdale told the royal commission he phoned Cardinal Pell in 1993 to tell him his uncle was abusing him, but the priest tried to silence him.

“I have just re-read the file of Ridsdale. The priest. Ex-priest. And the way he was dealt with was a catastrophe,” Cardinal Pell told the commission.

But when asked about rumours of abuse, Cardinal Pell said: “In those days, if a priest denied such activity, I was very strongly inclined to accept the denial.”

He said he heard “gossip” about rumours of sexual abuse by senior priest Monsignor John Day, saying the long distances between them meant there “wasn’t too much contact”.

The royal commission previously heard how an attempt by police to investigate allegations against Monsignor Day in the 1970s was thwarted by what was described as a “Catholic mafia” within the police force.

A newspaper article about a police investigation into Monsignor Day was “one of the first and perhaps the first [time]” specific allegations came to Cardinal Pell’s attention, he said.

He said he thought it was highly probable the article led to Monsignor Day’s resignation, and admitted “in light of what we know now”, the fact Monsignor Day was appointed a parish priest in Timboon a year later was “quite unacceptable”.

When asked about the Christian Brothers who were teaching in Ballarat, Cardinal Pell said he first heard reports of sexual offences in the early 70s.

“I could have heard it from one or two of the students and certainly I think one or two of the priests mentioned that there were problems … none of the activities were described to me, they were just referred to briefly,” he said.

“I mentioned [them] to the school chaplain, a priest who I greatly respected, I said, ‘there is talk about problems at St Pat’s college with (Brother Ted) Dowlan.’

“I said, ‘is there any truth in them?’ And he said, ‘yes there are, problems, certainly discipline problems, but I think the brothers have got the matter in hand.’ And in fact he left at the end of ’74.”