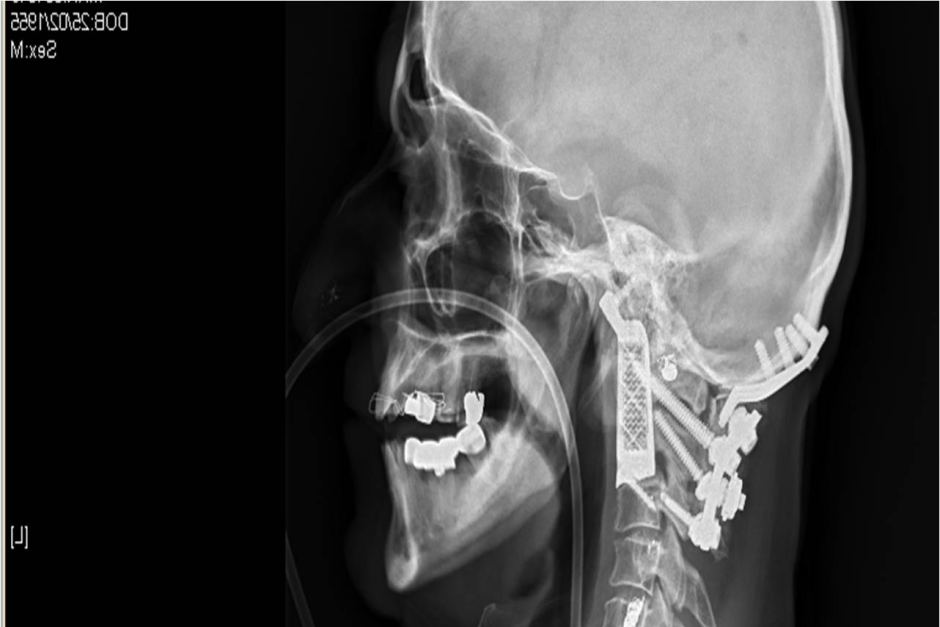 An Australian neurosurgeon has completed a world-first marathon surgery removing cancer-riddled vertebrae and successfully replacing them with a 3D-printed body part.

Ralph Mobbs conducted the mammoth 15-hour operation in December and the ABC’s 7.30 has been tracking his patient Drage Josevski’s progress since then.

At the time of the operation it was not known if Mr Josevski would survive the procedure.

“The surgery that we’re doing today is a particularly complicated and long and difficult surgery,” Dr Mobbs said before the operation.

“It involves exposure at the top of the neck, where the neck and the head meet, and it’s essentially [detaching] the patient’s head from his neck and taking the tumour out and reattaching his head back to his neck.”

Mr Josevski had been diagnosed with a rare and particularly nasty type of cancer called chordoma.

It can occur anywhere along the spine, but in Mr Josevski’s case the tumour was located at the top two vertebrae, giving him a very poor prognosis.

“Without surgery and without treatment of this type of tumour, the outlook for this patient would be particularly nasty and a particularly horrific way of dying,” Dr Mobbs said.

Dr Mobbs got to work designing the radical surgical procedure, ordering a custom 3D-printed body part to replace the vertebrae.

He used sophisticated computer software to plan every detail of the operation.

“This is the front of the neck where the tumour is being resected from and this is the space that we will have at the completion of the tumour resection,” he said.

“It’s a large gap, but we’ve pre-planned the prosthesis to fit perfectly in place – like a glove.

“And that will form the stability for where the head and the neck meet so his head won’t fall off.”

Last week Dr Mobbs met Mr Josevski along with his wife Lila Josevska and daughter Tanya Josevska for a consultation on the procedure.

“I must say that it was a delight to put it in, because after spending 15 hours taking out a very complicated tumour it was beautiful just to slot in the implant and have it fit so nicely and to be able to reconstruct the space left by the tumour.”

There was an unexpected complication – Mr Josevski is having trouble eating and speaking but is expected to recover within six months.

Tanya Josevska said the family was especially close and had struggled with the cancer diagnosis, which was first picked up on a family holiday to Mr Josevski’s native Macedonia.

“It was just really hard for Dad knowing that that’s what he had to go through, and not knowing what the outcome would be, as he said, we didn’t know if he could die in the operation, we didn’t know what kind of complications could happen, I mean the doctors explained it but you never really know,” she said.

Ms Josevska said despite the complication the family was optimistic about her father’s future and extremely grateful to the surgical team.

“He’s just excited to be around for my wedding and to see his grandkids grow up, and just be in our life,” she said.

“That’s why he did the operation.”

Dr Mobbs said 3D-printed body parts could produce similar results for other families as technology increasingly allows it to be used to replace bones and organs.

“3D printing of body parts is the next phase of individualised health care,” he said.

“To restore bones, joints, organs with this type of technology really is super exciting and Australia is supposed to be the smart country – well, here is our opportunity to really take it out there and to keep pushing the boundaries on the whole 3D-printed body part business.”