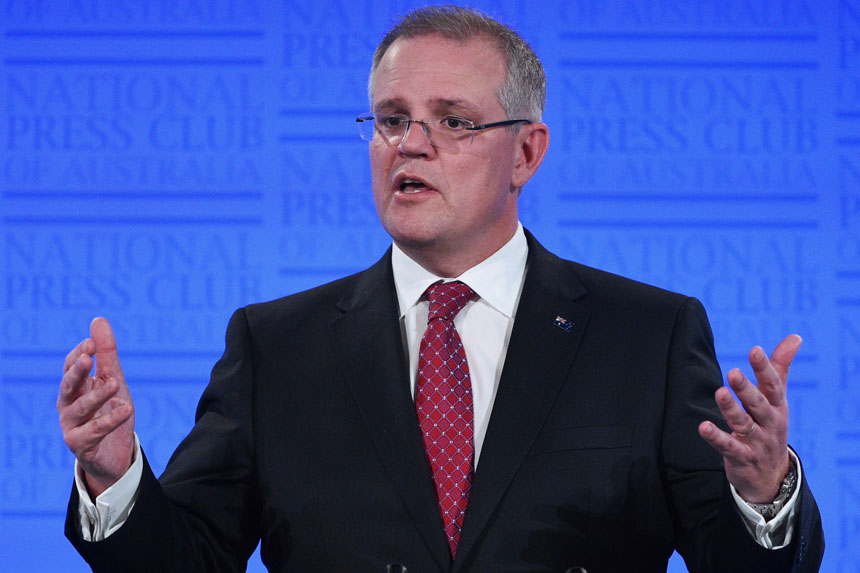 It is sometimes said that being the opposition leader is the toughest job in politics.

But in fact, as Scott Morrison discovered this week, being federal treasurer is even more difficult.

It’s that poor sod who typically bears the brunt of unpopular budgets, while the prime minister gets the kudos for popular ones.

And it usually falls to the treasurer to sell the government’s economic approach to voters, even though the broader community generally has no time or patience for the niceties of economic theory and sound policy settings.

When taking on the treasury role late last year, Mr Morrison would have been all too conscious of the task at hand.

His new boss, Malcolm Turnbull, had argued that the need for new economic leadership was the main reason for tossing Tony Abbott.

Treasurer Morrison clearly thought he was up to the task, telling the media only a couple of weeks ago that if could stop the boats he could convince the public to accept the wisdom of increasing the GST.

As it turned out, Mr Morrison didn’t deliver either.

As we noted a couple of weeks ago, the boats continue to come, albeit at a slower pace, and are turned around before landing in Australia.

And after starting to crab-walk away from the GST a couple of weeks ago, the PM abandoned it (and some might argue, his treasurer) altogether this week.

Not to be dissuaded from being left high and dry by his leader on the need for “substantial” tax reform, Treasurer Morrison moved on to the next challenge, kicking off his campaign to sell the May budget with an address to the National Press Club this week.

Unfortunately for Mr Morrison, he and his advisers misjudged the media’s expectations of the speech.

He clearly saw it as a scene-setting piece, much like the speech he gave to the Press Club as social services minister, which announced no policies but explained the need to rein in welfare spending.

This week’s address similarly laid out the need for spending restraint, while continuing to chip away at the long-held, but misguided, view that a balanced budget or surplus is the Holy Grail of economic management.

But Mr Morrison’s address was met with howls of frustration.

The media wanted him to announce actual budget initiatives – three months out from the May budget – and Mr Morrison drew hoots of scorn from Labor, who accused him of lapsing into the PM’s apparently favourite pastime – the polly waffle.

Labor is apparently determined to punish the Turnbull government for not delivering a surplus quickly enough, and who can blame them given the Rudd and Gillard governments were similarly castigated by the Coalition when it was in opposition.

The Treasurer’s rather miffed response was to protest that GST reform was not a “litmus test of tax testosterone”, and that he would not “sell the public a unicorn”, that is, create unrealistic expectations on the prospects for swift budget repair.

However, the week wasn’t entirely a policy-free zone, with cuts to negative gearing and superannuation tax breaks being kept on the table by the government.

Depending on voter ignorance

When Labor wasn’t busy churning out press releases and Twitter memes featuring unicorns this week, it was trying to suggest the fresh talent sworn into Malcolm Turnbull’s ministry would result in chaos because the L-plated ministers had no time to learn their portfolios and prepare the budget.

This claim is somewhat underhanded, given it depends on voters not understanding how the budget is prepared.

Government departments tend to carry on developing budget measures even when the deckchairs are being shuffled at the ministerial level.

In the meantime, election date speculation ran wild this week following a weekend story that the government had reached a deal with the Greens and independent Senator Nick Xenophon to stop micro party candidates from preference harvesting.

This is the practice that saw some members of the Senate crossbench, such as Ricky Muir, elected in 2013 with a minute number of votes.

If the government is able to quickly pass the enabling legislation – that is, during the next four weeks – there is a real chance it may go to a double dissolution election in July.

With opinion polls appearing to suggest the Prime Minister’s stellar popularity has begun to wane, Mr Turnbull may be keen to go to the ballot box as soon as he reasonably can. Scott Morrison has the toughest job in politics