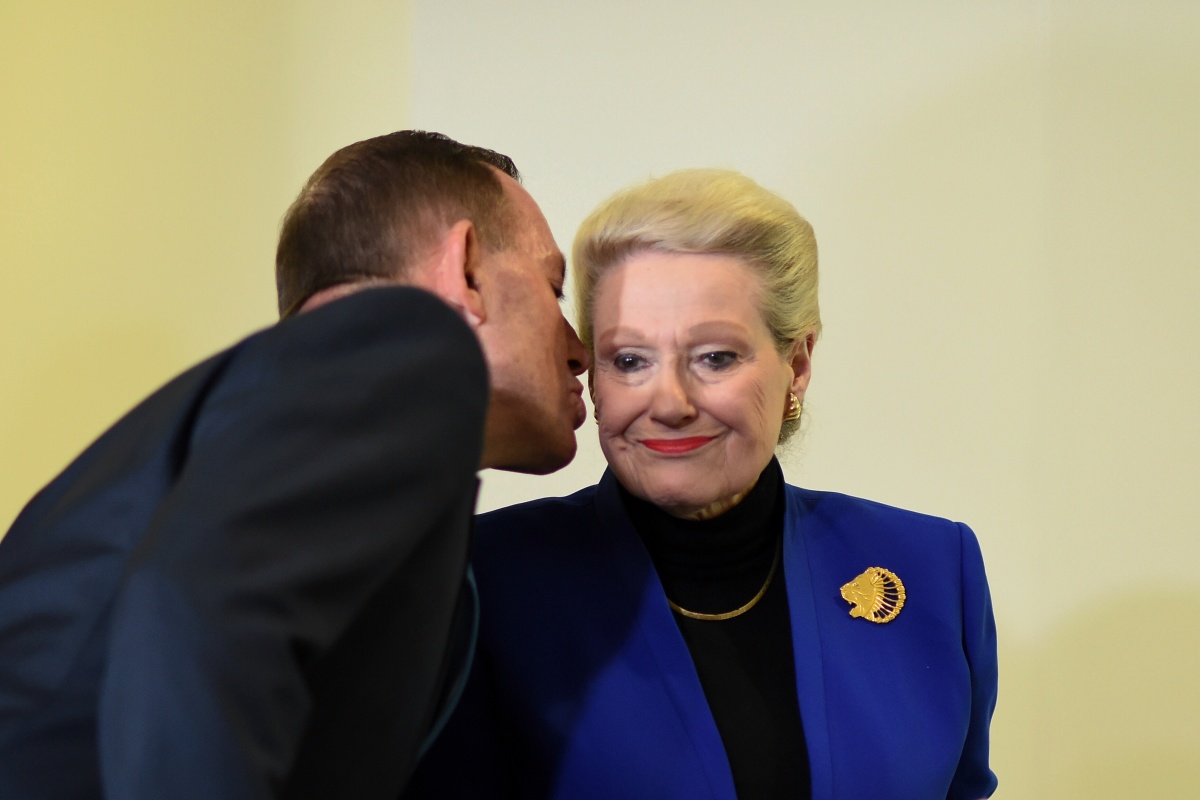 Bronwyn Bishop and Tony Abbott were once the closest of political allies. How times have changed.

Many moons ago, a freshly triumphant Mr Abbott exercised his power as Prime Minister to elevate Ms Bishop to the speakership, one of Parliament’s highest honours.

But a few years later, Mr Abbott has used what tattered political influence he retains to thwart Ms Bishop’s hopes of clinging to her backbench seat where she languishes in ignominy, stripped of the honour he fought to confer.

In happier times, Mr Abbott famously referred to himself as the political love child of Bronwyn Bishop and John Howard. Now, he seems to have used Mr Howard’s stellar reputation to twist the knife into Ms Bishop.

On Tuesday, it was reported that Mr Abbott had written a reference letter for Ms Bishop’s preselection adversary, Walter Villatora, chairman of Mr Abbott’s electoral committee. In the glowing letter, published by The Australian, he compares Mr Villatora to Mr Howard.

“Like John Howard, Barry O’Farrell, Mike Baird and so many others, you [Walter Villatora] have swiftly come to appreciate that the best way to combat the sway of factions – and to encourage good people to join our party – is to give all our members an equal say in the most important job our party does: that of selecting candidates,” Mr Abbott wrote, according to The Australian.

This cooling of affection for Ms Bishop did not surprise prominent party figure Jeff Kennett.

“After what Bronwyn Bishop did to Tony Abbott, he is not only entitled to do what he has done, he is obligated to do it,” Mr Kennett told The New Daily.

The former Victorian Premier was referring to the Choppergate scandal that claimed Ms Bishop’s speakership, and the events that followed.

For weeks, then-Prime Minister Abbott defended Ms Bishop from allegations she misused $30,000 of taxpayer money by chartering a helicopter from Melbourne to Geelong to attend a Liberal Party fundraiser.

Eventually, he was forced to tell Ms Bishop to resign as speaker to save the government further embarrassment.

In retaliation, Ms Bishop reportedly voted for Abbott’s foe, the current PM Malcolm Turnbull, in the subsequent leadership ballot. This was despite her long friendship with Abbott and the fact her ascension to the speaker’s chair was solely due to his support.

“Tony used his captain’s call to put Bronwyn Bishop in as Speaker and then she behaved appallingly and showed disloyalty to him and the party,” Mr Kennett told The New Daily.

“The very fact is that she owed her final opportunity in federal parliament to Tony Abbott but she disloyally turned on him.

“She can’t expect Tony to support her. She has outlived her usefulness as a parliamentarian.”

Ms Bishop has held the seat of MacKellar since 1994, when she took over from Jim Carlton. She has never won less than 52 per cent of the vote. In the 2013 federal election, she won with 62 per cent.

In December, Ms Bishop announced she would recontest the seat, triggering outrage among some party elders, Mr Kennett included, and setting the scene for a fierce preselection showdown, made all the more controversial by Mr Abbott’s intervention.

“She probably has the numbers in her own seat, but to be quite honest this is an occasion when the party should be looking for fresh blood,” Mr Kennett said.

“This is all about Bronwyn rather than party or country. So time to go.”

Who is Walter Villatora?

Ms Bishop may currently have the numbers, but Mr Villatora comes very well recommended. In addition to the support of a former PM, he reportedly holds a reference from NSW Premier Mike Baird, for whom he worked as campaign director.

According to his LinkedIn profile, Mr Villatora is a fellow of the Australian Institute of Management.

He is currently the managing director of Sydney-based consulting firm Outcome Group.

Fairfax Media reported he was a “close confidant” of Mr Abbott.

He is a business graduate from the University of Technology in Sydney.

If Ms Bishop does survive this preselection battle, she may face businessman Dick Smith, who has sworn to prevent her from sitting again in Parliament.

Nominations for preselection in the seat of MacKellar close at 5pm Friday.

The New Daily contacted Mr Abbott’s office for comment, but did not hear back before publication. ‘I am not afraid’: The modern unknown soldier risks it all in Ukraine
Greens sign up for Labor’s looming jobs-and-skills summit as Liberals stick with boycott
Joe Biden’s $430b green victory for the environment
China cementing its Thailand ties with joint military exercises
NRL: Titans frantic to end 10-game losing streak as Manly showdown looms
AFL: Western Bulldogs cling to finals hopes after GWS thriller
Why Malcolm Turnbull has his backbench fretting
Today's Stories