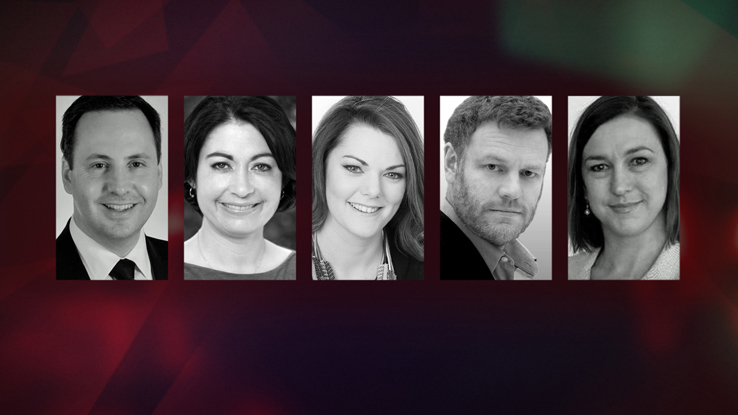 Ms Hanson-Young was wearing a white t-shirt with the hashtag #letthemstay on the ABC’s Q&A panel on Monday night, in reference to a group of asylum seekers set to be deported from Australia by the government and returned to Nauru.

The High Court threw out a challenge to the Australian government’s immigration detention centre on Nauru.

• Cracks are starting to appear in the Coalition: poll
• Dreyfus refers Robert to AFP
• Ian Macfarlane to quit politics

The case was launched by a Bangladeshi detainee on Nauru who was brought to Australia for treatment and later gave birth to her daughter in Brisbane.

Thousands have rallied in support of the 270 asylum seekers, leaders of some religious institutions said they would open their doors to them, and state and territory leaders have written open letters to Prime Minister Malcolm Turnbull pleading with him to ‘let them stay’.

“The truth is the government doesn’t have an exit strategy for Nauru and Manus Island and they need to get one because it’s not sustainable. You can’t continue to leave hundreds of people effectively rotting in these camps,” Ms Hanson-Young said.

“I visited them. I’m one of the few people in this country who has been allowed to go inside these camps and to see them. Unlike the doctors and the nurses and the guards who work in these places, I’m not gagged to tell the story of what goes on in there. Luckily.

“Don’t be mistaken here. The deterrence policy is designed to break people and to say ‘We’ll make it as difficult as possible so you give up’.

“I can tell you what, after 30 months, if they haven’t given up yet and gone home, and they’ve been assessed as refugees, that’s because they can’t. They can’t go home. We need to bring them to Australia and let them stay and get on with having a more humane approach to resettling.”

Meanwhile, conservative commentator and writer Mark Steyn said he was unsympathetic to the asylum seeker situation.

“I think the great population migrations that are under way are a terrible thing and I would like the evil of human trafficking to cease,” Mr Steyn said.

“It would be better for the world if their countries were to be made more habitable.

“If you are going to warehouse people in essentially former Australian colonies, then I think you have an obligation to process them expeditiously. There’s no reason why people should be here for 2.5 years. I also think you have a responsibility to own the problem.”

Incoming Minister for Trade and Investment Steve Ciobo fired up and was on the defensive about the policy, engaging in a back-and-forth spat with Labor Member for Griffith Terri Butler.

“We give people options to resettle into a third country,” Mr Ciobo said.

“What third country is on offer? You had four people go to Cambodia, didn’t you? What is the third,” Ms Butler replied.

“If you were fleeing persecution, the opportunity to end up in another country where you are free of persecution…” Mr Ciobo said.

But Ms Butler cut him off saying: “What opportunity are you giving them? You have had people in camps for 30 months.”

“It is a disgrace,” she replied.

Government’s first slump in the polls

The Q&A panel discussed the Coalition’s first sharp slide in popularity – since Mr Turnbull became PM – as reported in a Fairfax-Ipsos poll on Sunday.

With an election expected later in 2016, whispers of superannuation reform, a boost in the GST to 15 per cent and privatisation of parts of Medicare appear to have unsettled the electorate.

The Coalition had enjoyed strong support since the sacking of Tony Abbott, but recent policy discussions and controversies have sapped the government of momentum, according to the poll.

It revealed a four-point two-party-preferred slide to 52, compared to Labor’s 48.

Chief political correspondent of The Guardian Lenore Taylor said she thought the polls were an indication the public hadn’t really figured out what Mr Turnbull was about yet.

“There was a central contradiction in his ascent to power. On the one hand, he promised the party – his colleagues – that he’d be basically the same as Tony Abbott, not much different, but the public were led to believe he would be a lot different,” Ms Taylor said.

“He has taken his time to figure out what policies he’ll change and which ones he’ll leave the same. He has had a mess on tax reform recently but we are assured that will be cleaned up by the budget.

“People are suspending judgment. The gloss has worn off and they are waiting to see what he delivers. To my mind, that essential schism, conundrum from the start is an unanswered question.”

Ms Butler said the polls reflected the fact that Mr Turnbull said one thing and did another.

“He says one thing, does another. People are disappointed in that.

“Tony Abbott is someone who always stuck to his values, crazy as those values may have been from time to time.”

Mr Ciobo was on the defensive about embattled former minister Stuart Robert on Monday night.

The former Human Services Minister resigned on Friday after allegations he allegedly breached ministerial standards during a 2014 mission to China, where he tried to secure personal gain from a business trip.

Mr Ciobo said Labor wanted to see a police inquiry and was blowing the incident out of the water.

“I think that the reason why the Labor Party has said they want to see a police inquiry is because they operate on the principle of throw enough mud and hope some of it sticks,” Mr Ciobo said.

“The reason I say that is Mark Dreyfus happened to use the premiere ABC Radio platform to announce they wanted a police investigation. Politics doesn’t change significantly year to year.

“The adage of throw enough mud and hope it sticks, adequately applies. They could have written a letter to the Australian Federal Police [AFP] and that would have been it. But instead it is about grandstanding.

“That’s the Opposition’s job to do. I think Australians get that so that’s to be expected. This notion people are talking about a deal being done for Malcolm to become leader and nothing would change, that’s just wrong. That is complete rubbish.”

Ms Butler replied: “He did a specific deal with the Nationals.”

“Well, I was there with the greatest respect in the party room. The party room took the very big decision to change Prime Minister. There was nothing said about deals being done, about no policy changes, things like that.

“Different people took different decisions and positions about who they wanted to lead the party. Malcolm Turnbull is now leading the Liberal Party and he is Prime Minister of our country. He makes the calls.”