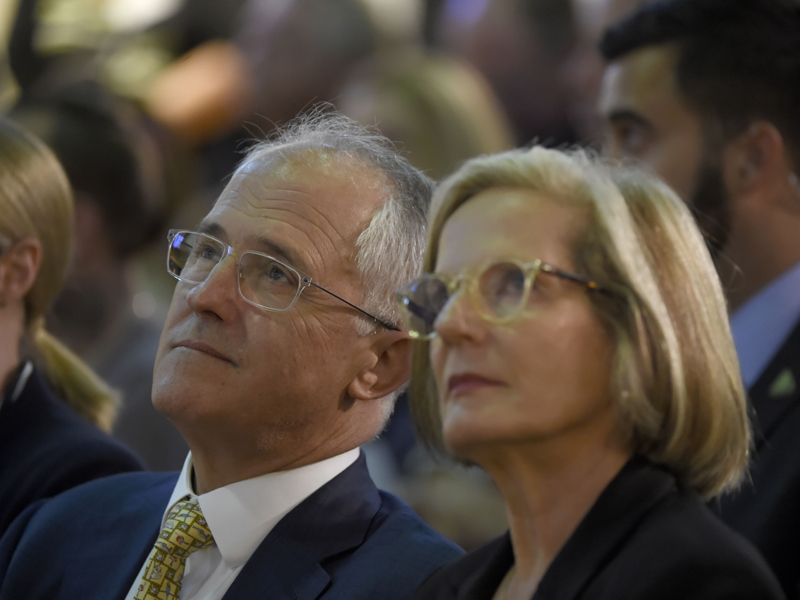 Marriage equality proponents were enraged by the Valentine’s Day love letter, slamming the PM for his government’s gay marriage policy.

Mr Turnbull –  who supported marriage reform – uploaded an image of himself and Lucy onto his Facebook page from when they were young, which read: “When I first asked Lucy to marry me, she said, ‘Let’s wait until we grow up.'”

“Well we didn’t wait long and now it is almost impossible to imagine, let alone remember, what it was like not to be together, so much so that I have a much clearer sense of ‘Lucy and me’ than I do of ‘me’,” he said.

By 5pm there were more than 30,000 likes on the photo of Mr Turnbull and his wife, a former lord mayor of Sydney.

Most of the PM’s Facebook followers wished the pair well on the day of love, however, others slammed him for running a party which did not allow same-sex couples to tie-the-knot.

Douglas McFarland wrote: “When I first asked my partner to marry me, he said let’s wait till our government lets us…and now, four years later, we have to wait until 51 per cent of the country lets us (and then the government an still reject it)…you and Lucy are beautiful together, an inspiring couple…just wish your leadership was more inspiring on Marriage.”

“Perhaps Valentine’s day is the perfect day to scrap the plebiscite! Happy Valentine’s day to you both, it must be a lovely reminder of your marriage. As opposed to the constant reminder that same sex couples love is less!”

Meanwhile, Tomas Allan Leaumont agreed with him and posted: “Well because of you and your party I will never know what it will be like to marry my parter of nearly 10 years. So happy for you both.”

Lin Jessop said: “What a sad state of affairs when our PM can’t express his love for his wife without being vilified. Happy Valentine’s Day to Malcolm and Lucy.”

Meanwhile, Evelyn Gray was torn: “Congratulations on your happy marriage. I’m very lucky also to have been married for over 40 years. However, my husband and I are saddened that our gay daughter is still waiting for the same right as her sister; the right to marry the love of her life. No plebiscite please – a free vote in Parliament is all it will take!”

In 2015, when Tony Abbott was PM, Mr Turnbull opposed a public vote and a free vote for Coaltion MPs to make a decision on the policy.

The government said at the time the issue would be put to the public through a plebiscite which was expected to happen in 2016.