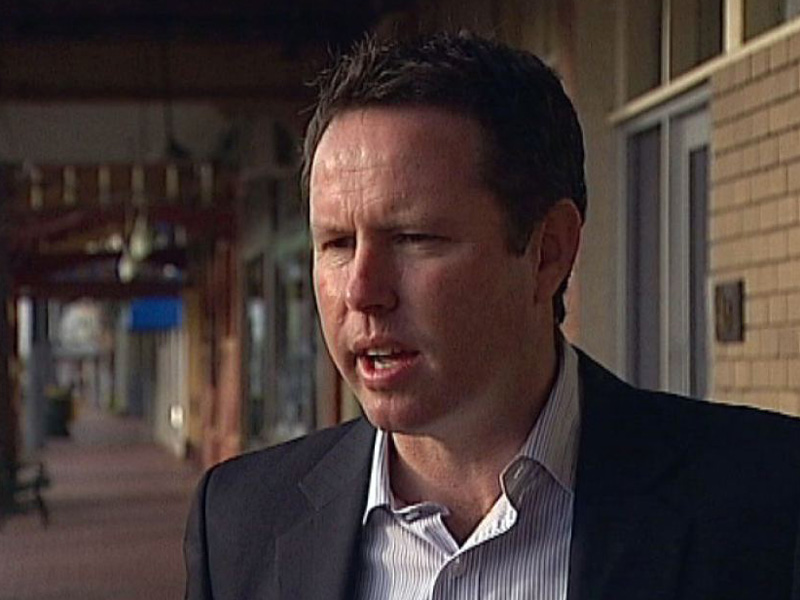 Nationals leader Barnaby Joyce is being urged to reprimand one of his MPs who equated same-sex relationships with randy rams.

Member for Mallee Andrew Broad made the analogy in an interview with local newspaper, Sunraysia Daily, published in the February 6 edition.

After defending the Federal Government’s plan to put the same-sex marriage issue to a plebiscite, Mr Broad said that he would not call a relationship between a homosexual couple a marriage.

“I think a bicycle is not a tricycle, and relationships can have different names,” Mr Broad said.

“I can put the rams in a paddock and they might mount one another, but no lambs will come out.”

His comments have angered Greens senator Robert Simms, who has called on Mr Joyce to step in over the issue.

Senator Simms, one of the few openly gay politicians in Australia, said this could be the new leader’s first test.

“It’s first day in the job — he should come out and call his member into line,” Mr Simms said.

“He needs to ensure that his members of parliament conduct themselves in a respectful and appropriate way. Really, he should step in.”

Mr Simms said he had concerns that similar comments could be made in the lead-up to a plebiscite on same-sex marriage, citing concerns over a potential “mother of all hate campaigns”.

He called on Mr Broad to apologise and withdraw the comments.

Mr Broad declined to be interviewed for AM, but provided a statement.

“I am unavailable to speak today due to leadership discussions and travel. However, I would like to say that the article in question is not an entirely accurate reflection of discussions,” the statement said.

“The Government will hold a plebiscite on changes to the marriage act, and every Australian over the age of 18 will be given an opportunity to decide the outcome in line with their personal views.”

Kieran Mangan, a gay man living with his partner in Mr Broad’s electorate, contacted his office over the remarks.

Mr Mangan said such comments were dehumanising, but said Mr Broad had apologised.

“He responded ‘sorry that I caused offence. The newspaper took it out of context’,” Mr Mangan said.

Mr Mangan said he was disappointed to hear such language from an MP.

“Same-sex marriage isn’t about breeding, whether it’s humans or lambs. It’s about two people being allowed to love each other,” Mr Mangan said.

“Directly connecting people who are same-sex attracted to farm animals — I think it’s a very stupid thing to say.”

Sunraysia Daily journalist Christopher Testa told AM the words printed were the exact words Mr Broad used, and were kept in context.

It is not the first time a politician has likened same-sex relations to animal behaviour.

In 2012, Liberal senator Cory Bernardi moved to the backbench after a furore when he argued that permitting same-sex marriages could lead to legalised bestiality.

And it is also not the first time Mr Broad himself has used animals to explain his stance on gay marriage, according to Mildura Rural City Councillor Ali Cupper.

“At least one other local person has said that in a one-on-one conversation with her at one stage he used the same analogy,” Mr Cupper said.

He also accused Mr Broad of hypocrisy, as he recently helped launch a local chapter of Headspace — a mental health support group for young people, including those who identify as gay and lesbian.

“These are kids who require extra support because of the sort of messaging precisely that our federal member is beaming out, which makes these children and these young people feel all the more self conscious,” Mr Cupper said.

“This is about Broady having a laugh at the expense of a group that the Nats don’t really particularly care much about.”

However this cannot be argued across the board, as the National Party’s Darren Chester was the first federal National MP to come out and say he supported gay marriage.

Mr Cupper concedes this.”You’re right, and I think that the young Nats too, they are more supportive of same-sex marriage and those sorts of progressive social issues.”

MP likens same-sex relations to ‘rams in a paddock’