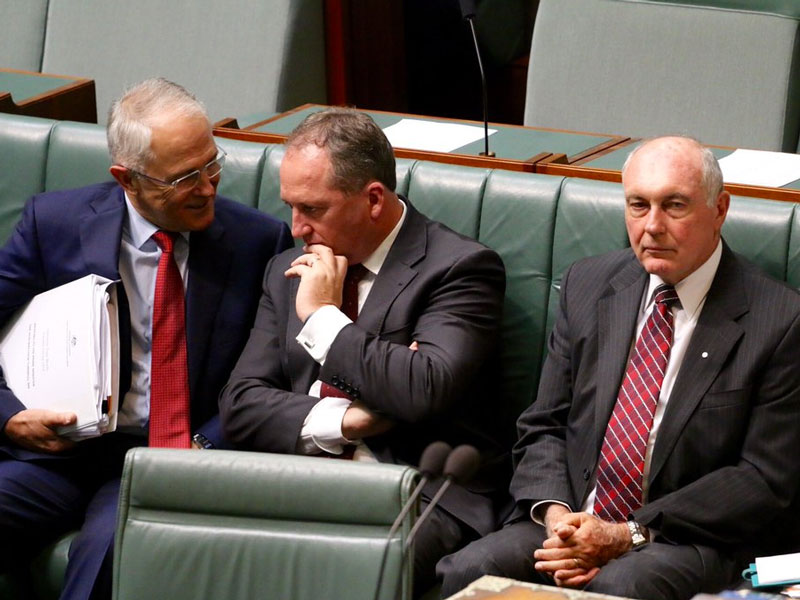 The Prime Minister Malcolm Turnbull (L) is taking a chance that Barnaby Joyce will be given the all clear by the High Court. Photo: ABC

Barnaby Joyce says his party will not take “dramatic” steps in renegotiations of the Coalition agreement, after he was elected leader of the Nationals on Thursday night.

New South Wales Senator Fiona Nash was elected as deputy, from a crop of seven candidates, in a ballot following the resignation of Warren Truss.

It means all three major parties now have a male-female combination at the top tier of the leadership team.

In his first appearance as leader, Mr Joyce, who was elected unopposed, told reporters the “responsibility is not taken lightly”.

“This responsibility is taken with all the respect that it deserves,” he said.

“I think that within the next few years we will continue to build on the exceptional work that has been done by the most recent giant of our party, Warren Truss.

“Warren will remain my friend, guide and philosopher and I will sound him out for advice as to who should go where.”

Barnaby Joyce: nuts? Or a genius? Click here to find out

There were 21 Nationals MPs and Senators who met at Parliament House in Canberra for the vote on Thursday night, taking roughly an hour to decide.

The party would reconsider the Coalition agreement over the next day, which was currently between Mr Turnbull and Mr Truss.

“I don’t think there will be anything dramatic. We aren’t foolish,” he said.

“We know we’re not that far away from an election.

“Our focus is clearly laser like on making sure that the Australian people get a clear juxtaposition between an effective Coalition, which we are, and the unfortunate position that the Labor Party currently finds themselves in which is basically looking for a cliff to jump off.”

Earlier on Thursday, Mr Truss indicated the Nationals were entitled to an additional Cabinet position, taking their total from three to four. It was not clear what portfolio they sought.

Mr Joyce said he would consider whether he would change from the agricultural portfolio “over the next 24 hours”.

Ms Nash’s promotion meant she would take on a Cabinet spot, and said she was “well prepared” for the challenge.

As many as seven Nationals reportedly stood for the deputy position – one-third of the party room.

Earlier in the night, one prominent betting agency had Mr Chester as the favourite to win, with Ms Nash at fifth.

Announcing the result, MP George Christensen said the official tally would not be released.

He described both Mr Joyce and Ms Nash as “fierce advocates and fighters for rural and regional Australia”.

“The ballot papers have been destroyed. Barnaby and Fiona will formally take office when Warren Truss officially resigns,” he said.

“Can I finish by saying if there is one great legacy that Warren Truss has left the National Party it is a sense of unity and loyalty and that will continue under this new leadership.

“We are all very good mates and we will continue to be even though some people missed out tonight.”

Speaking before the ballot, outgoing leader Mr Truss said he left the party “strong” and in an “excellent position”.

“It was a great honour for me to be the leader of the party for something over eight years,” he said.

“There have been good times and bad times through.

“I am delighted that we have such a pool of talent who have expressed interest in taking a leadership role tonight.”

‘Every regional town would tear us to pieces’

Rural and regional Australians were the focus of discussions on what portfolio might be taken on, Mr Joyce said.

“We represent some of the most disadvantaged people across the country and we will never stop fighting for them, making sure that we look after them and that they get their fair share,” Ms Nash said.

One thing they would not be advocating was for the closure of the mining industry.

“We are not foolish. We will be stone motherless broke if we closed down the mining industry,” Mr Joyce said.

“There is no economic sense and every regional town would tear us to pieces.”

Mr Joyce has long been tipped to take the leadership and has previously announced an intention to run for the role if Mr Truss were to step down.

Mr Joyce has become known as an outlandish character in the Nationals Party in his 11 years in the Australian Parliament.

Most recently, it was for his threat to euthanise two terriers owned by Hollywood stars Johnny Depp and Amber Heard after biosecurity officials learned they were brought into the country illegally.

“It’s time that Pistol and Boo buggered off back to the United States,” he said at the time, adding that confessions would not be made – even if someone was “voted sexiest man alive” twice.

Not sure any other party does leadership ballots with pizza and beer in whips office – love the Nats #auspol pic.twitter.com/a5YN5Cc4lE

Congratulations to the new @The_Nationals Leader @Barnaby_Joyce and his deputy @SenatorNash who will both do a great job for regional Aust. — Michael McCormack MP (@M_McCormackMP) February 11, 2016