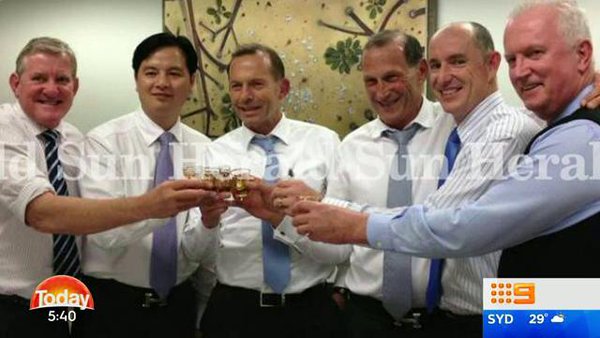 Former Prime Minister Tony Abbott has been embroiled in the Stuart Robert controversy, according to reports.

News Corp reported on Thursday morning that Human Services Minister Mr Robert, who is in hot water for a potential breach of ministerial standards, held a dinner in his office with then Opposition Leader Mr Abbott and a Chinese business mogul.

This dinner — three months before from the 2013 federal election — was allegedly organised for Chinese businessman Li Ruipeng to meet senior Liberals including then Shadow Resources Minister Ian Macfarlane.

Mr Ruipeng was reportedly at the dinner to also meet Mr Abbott and then Liberal National Party president Bruce McIver.

Mr Robert has been under investigation for a possible breach of ministerial standards.

It was revealed earlier this week that Mr Robert allegedly joined Mr Marks in Beijing to attend a signing ceremony between Nimrod Resources and a Chinese-government owned firm called Minmetals.

It has also been alleged Mr Robert led a group of Nimrod officials to meet a Chinese government minister, while he had claimed he was on holiday.

It has been alleged at this dinner that Mr Li gave expensive watches to MPs in attendance, however the watches were handed back once the MPs realised they were not fake.

Mr Abbott’s spokesman told News Corp that he had originally declined to attend due to other commitments, but “agreed with a request from Mr Robert to drop in’’.

“He was not aware of any guests attending the dinner until he arrived. It is accurate that Mr McIver and Mr Macfarlane were present and earlier in the evening, Mr Morrison had joined the group,’’ the spokesman said.

“Mr Abbott was not responsible for the dinner, its purpose or guests.”