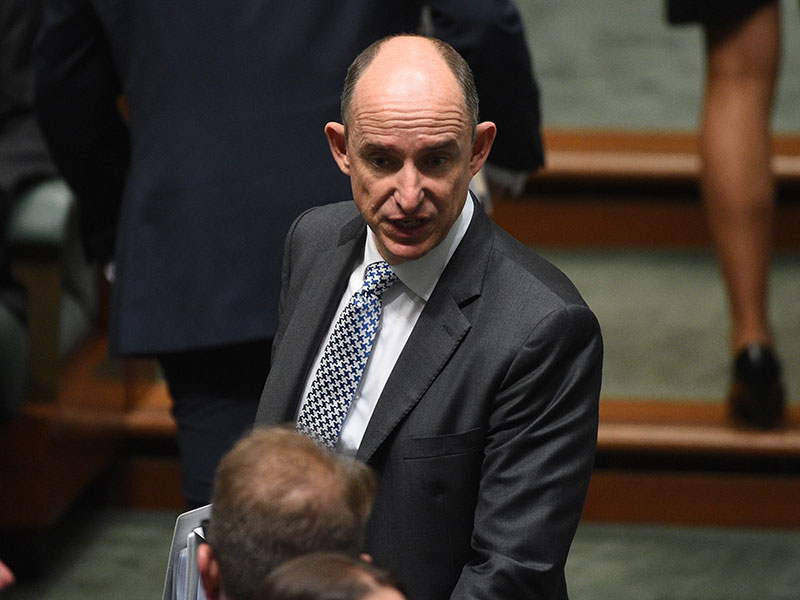 Embattled minister Stuart Robert briefed the Defence Department about a trip to China, despite insisting he had not gone there in an official capacity.

Mr Robert, the former assistant minister for defence, is facing Labor calls to be sacked for breaching ministerial standards by helping a friend and Liberal Party donor sign a mining deal in China.

A day after the deal was signed he met with China’s vice-minister of land and resources Wang Min.

Prime Minister Malcolm Turnbull is awaiting a report on the matter from his departmental secretary before taking any action.

Mr Robert insists he made the trip in a personal capacity and is confident he did not act inappropriately.

Defence Department secretary Denis Richardson told a Senate hearing on Wednesday his department was aware at the time the minister was in Beijing.

“Following his return to Australia, minister Robert asked his office to advise the department who he had met in China,” Mr Richardson said.

The department organised a trip to Singapore immediately after the Beijing visit, where Mr Robert was to represent the defence minister at a meeting.

On his arrival in Singapore, Mr Robert was met by the Australian defence attache, as well as a Singapore government official.

Mr Richardson was unable to say exactly when it was that his department became aware of Mr Robert’s plans to travel to China.

Asked if the minister indicated whether the visit to China was a private trip, Mr Richardson said: “I’m not aware that we were advised that he was travelling to China privately.”

Opposition Leader Bill Shorten attempted to censure the PM on Wednesday over the fact that he had not sacked Mr Robert already.

It says a minister shall not “act as a consultant or adviser to a company business or other interests, whether paid or unpaid, or provide assistance to any such body, except as maybe appropriate in their official capacity as minister”.

Mr Turnbull said he was following “due process” in awaiting a report from departmental secretary Martin Parkinson.

“Dr Parkinson will complete his inquiry and when he does I will review it and the House will be well aware of the conclusions that I make,” Mr Turnbull said.

Finance Department records show Mr Robert charged taxpayers $900 in flights and travel allowance on the day of his private trip to China.

Asked about the domestic travel, frontbench colleague Christopher Pyne told 5AA radio: “He was probably working. I mean that’s what ministers do, they work.”

Labor senator Stephen Conroy questioned whether or not Mr Robert took his official telephone with him to China – which would have been a breach of security protocol.

Mr Richardson said he did not know, but if he were to visit China in his current role he would not take an official phone.