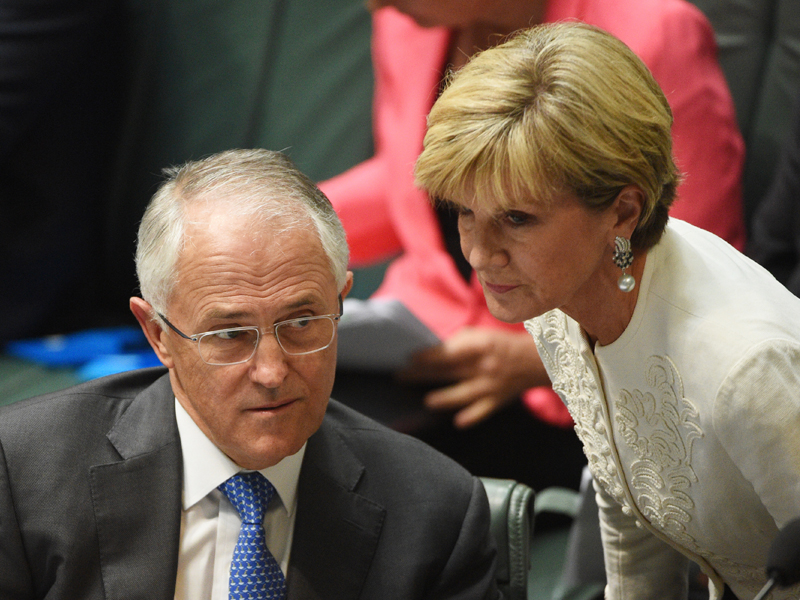 The Coaltion’s approval rating has taken a serious blow after a number of controversial revenue-raising measures fell flat with the Australian public.

A Morgan Poll released on Tuesday showed the ALP had spiked by 2.5 per cent on a two-party-preferred basis, as reports that the government could sell off Medicare’s claims and payments system to become privatised were first reported in Perth’s West Australian newspaper.

The move – which would include pharmaceutical and aged-care benefits – was tipped to be announced by Treasurer Scott Morrison in the May budget, along with changes to increase the Goods and Services Tax (GST) to 15 per cent and superannuation reform, which have all been widely criticised.

• Secret Liberal plan to privatise Medicare
• Government has ‘so much fat’ currently: Q&A
• Coalition start to tax friendship over GST

The $50 billion-plus Medicare outsourcing plan was yet to be signed off by the PM.

The latest Morgan Poll also revealed that primary support for the Liberal-National Party is 43.5 per cent (unchanged), with the ALP at 29 per cent (up 1 per cent).

When probed about the secret proposal reportedly being developed by the government during question time on Tuesday, Malcolm Turnbull said Medicare must update its technology to make it simpler and faster to deal with the healthcare agency.

“A 21st-century government looks at innovative ways to improve every element of the government’s services,” he told parliament.

Roy Morgan Research executive chairman Gary Morgan said the Coalition’s lead in the poll had been cut to its smallest since Mr Turnbull became Prime Minister just less than five months ago.

“The idea of increasing the GST has not impressed some Coalition backbenchers who would face a tough sell in convincing the electorate that increasing the taxation burden on goods and services – whilst lowering tax in other areas – is the right idea to get the Australian economy moving again, following the end of the mining boom,” Mr Morgan said.

The Community and Public Sector Union (CPSU) said it was gravely concerned by the government’s alleged plans to privatise parts of Medicare, which it said placed highly sensitive medical and financial records of all Australians into private hands.

But the Consumers Health Forum of Australia (CHF) told The New Daily they would not oppose it.

“Provided there were firm guarantees regarding protection of personal patient data, service cost and efficiency and a clear case for better levels of customer service from processing agencies, CHF would not oppose it,” a spokesperson said.

The private sector would administer claims and payments while also overseeing eligibility criteria.

According to reports, Australia Post, Eftpos providers, Telstra and the big banks were reportedly showing interest in the plan, because they already have online payment and supply structures in place.

“Medicare absolutely needs to stay in public hands. Privatising Medicare would mean handing control of a system that we all rely on to a private company that would not be answerable to the Australian public,” Ms Flood said.

“The privacy of every Australian’s medical records is at stake here, but so is the integrity of Medicare and other services that all Australians rely on.

“We need these services to be run for the benefit of the people who need them, not for profits to line the pockets of private interests.”

Labor took the Coaltion to task over the move on Tuesday with Shadow Health Minister Catherine King saying the ALP was deeply alarmed about the plan which could jeopardise patient data of every Australian and the jobs of 1400 staff at centres across the country.

“This idea, from the failed Commission of Audit Report, would mean that these important functions would be being delivered for profit, not with the best interests of patients in mind.”

Opposition Leader Bill Shorten said the Coalition was “anti-Medicare” and should take the plan to the election.

The CPSU said it had already collected more than 14,000 signatures of support against the move to privatise parts of Medicare through www.stopmedicareselloff.com.au.