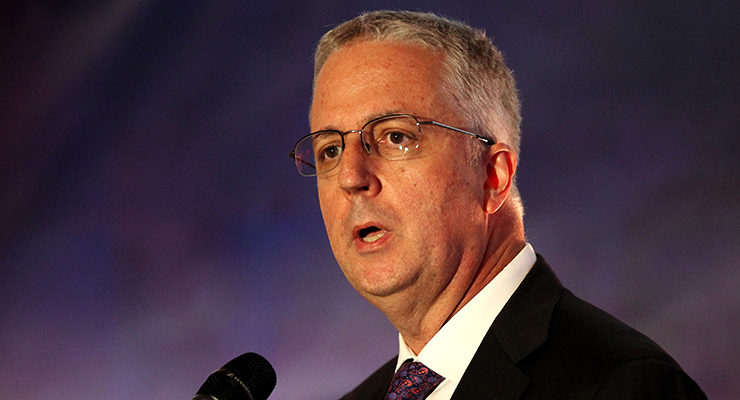 Mr Scott made the statement under questioning from senators in his last estimates hearing before leaving the ABC.

The committee was discussing SBS’s opposition to the ABC moving Foreign Correspondent to 9:30pm on Tuesday nights in 2016, the same time SBS airs its current affairs program Dateline.

• Telstra down across Australia
• Turnbull: raise your own taxes
• Offshore detention ‘government-sanctioned cruelty’

He said Catalyst was now increasing the number of shows it produced each year and therefore could no longer share a slot with Foreign Correspondent.

“It is a challenge in practice with two totally distinct public broadcasters, unless you expect us [the ABC and SBS] to sit together and bid side by side and program side by side,” Mr Scott said.

To that comment, West Australian Liberal senator Chris Back replied: “Well yeah, what it does do, and thanks for raising it, it begs the question really from the viewpoint of the consuming public, why do we want the two public broadcasters?”

“And that’s a matter for government,” Mr Scott said.

“I may comment more on this down the track, Senator, but I do think in a way, I mean SBS was created well before digitisation, well before digital television … you know it’s an analogue solution in a digital world.

“I think it’s a matter that’s worthy of investigation down the track.”

“Yes, I think in a way, Senator, that the core tenets of SBS when it was established, was to provide multicultural broadcasting.

“I suspect that the SBS of today, which is more general interest broadcasting, means that the distinction between the two broadcasters is not as distinct as it once was.

“There is far less subtitled content on SBS in primetime than would have been the case 20 to 30 years ago on their main channel.”

There has long been public debate about whether the SBS and ABC should be merged.

Both broadcasters are under funding pressure.