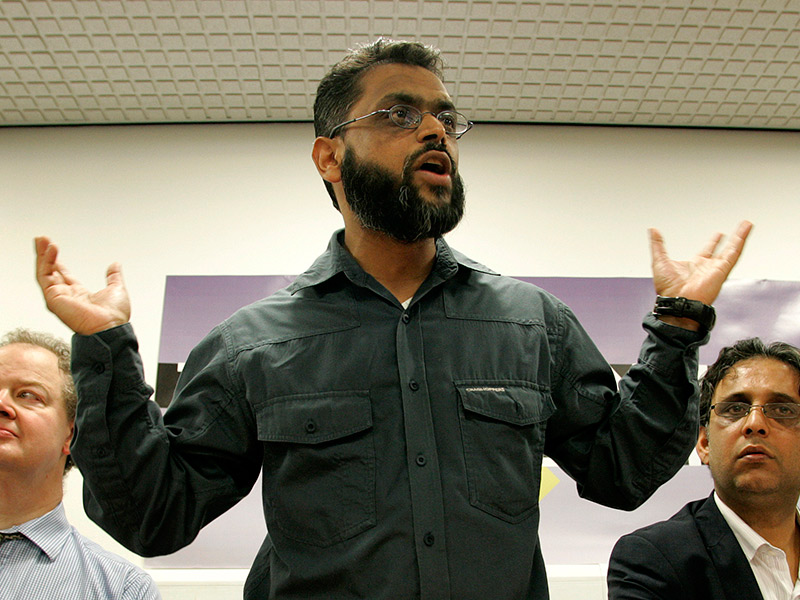 A former Guantanamo Bay detainee has told a conference of young Muslims in Sydney that they were being targeted in an unprecedented way and Australian anti-terrorist laws were even more draconian than those in Britain.

Delivering a videotaped address from London, Moazzam Begg, who was held at Guantanamo from 2002 to 2005 but later awarded compensation by the British government for his imprisonment, said his most powerful memory of the infamous prison was at sunset, when the American soldiers were obliged to salute their national flag while Muslims prayed.

“Both were saluting the objects of their devotion,” he said. “One salutes a flag, the other salutes the creator of the universe.”

Mr Begg, who was also jailed in 2014 in the UK on charges of training terrorists and providing terrorist funding following a trip to Syria only to have the charges dropped, then asked which was the most sincere of the two groups.

To paraphrase him: Is it the soldiers who were honour bound to defend freedom while imprisoning people without trial, or those who stood firm in the face of great difficulties?

“We know they want to extinguish the light of Allah. These governments are targeting our belief system.”

Mr Abbott frequently labelled the Hizb, as they are often called, as un-Australian and apologists for terror.

Student associations involved included those from the universities of Sydney, Macquarie, Western Sydney and the University of Technology Sydney. A federally-funded Migrant Resource Centre also made presentations.

As is customary at such events women were seated on one side of the hall while men sat on the other side.

Within the hall there was little interaction between the two genders, but women played a strong role from the stage, with a number of addresses, performances and presentations.

The first speaker, psychologist and university lecturer Hanon Dover, said anti-radicalisation and countering violent extremism programs being peddled by government were “past flimsy”, were not based on research and were stigmatising normal Islamic behaviour.

Praying five times a day, respecting traditional Muslim gender roles and opposing Australia’s foreign policies, behaviour and views common to many of the country’s Muslims, were all being regarded as signs of radicalisation.

“Countering Violent Extremism programs are not working in the USA or the UK, but they are being adopted in Australia,” she said.

“Once we alter our behaviour to conform to the government we become trapped. They are trying to stop us for our beliefs, our ideas. Allah has given us the solution. We have the Koran.”

Ms Dover said Muslims did not want social cohesion at the expense of their honour and dignity.

The single most visually and emotionally dramatic moment of the conference came with the re-enactment of a terror raid, accompanied by news footage of Australian police operations.

Lights flashed and sirens screamed as a line of actors dressed in black uniforms blazoned with authentic-looking police insignia, stormed the stage, manhandling a young boy and throwing his middle-aged mother to the floor. The treatment of women during terror raids has been an incendiary issue within the Muslim community.

The scene closed with the woman standing in full burqa on stage.

“I heard the police sirens coming down the street. There was a silence and my heart stopped as I heard the crash at the front door. There were so many of them,” she said.

“My son is now in solitary confinement, despite being young and with no criminal record. For the Muslims in the Goulburn Supermax there is only the presumption of guilt. No one deserves to be treated in such a way. We must stand up and speak against repressive laws targeting Muslims. We will not accept being made to feel inferior.”

The ever-controversial Hizb spokesman Wassim Doureihi praised the activism of a younger generation of Australian Muslims and said he refused to accept the narrative of moderate and extreme Muslims. He closed the conference saying: “Our history is a history of the best of mankind, sent to us from Allah.”

The proceedings were filmed and will be placed on the Confident Muslim Campaign’s Facebook page.

John Stapleton has worked as a journalist at The Sydney Morning Herald and The Australian. His most recent book, Terror in Australia: Workers’ Paradise Lost is available in digital format at all major outlets, including Amazon, Barnes & Noble, iBooks, Google Books and at Australia’s major online bookstore Booktopia. It will also be released in paperback in March 2016. ‘You are being targeted’: former terror suspects