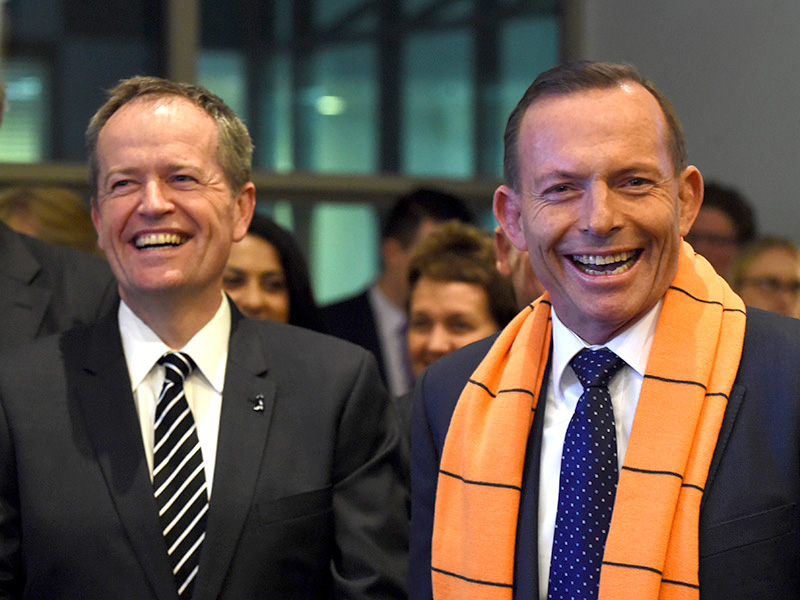 Last year, Tony Abbott made Bill Shorten’s Australia Day by including the Duke of Edinburgh in the list of newly reinstated knighthoods.

That just added to the growing perception that we had at that time a Prime Minister out of touch with the national sentiment and who was a throwback to an earlier era.

The 2014 budget with its cavalcade of broken promises and palpable unfairness had already done most of the damage to Mr Abbott’s standing.

The knighthood for a British royal on Australia’s national day was just another brick in the wall.

This year, Mr Abbott gave his gift to the Opposition Leader a couple of days early. And make no mistake, it is a gift.

Whatever way you cut it, the dumped Prime Minister’s decision to run again in Warringah will feed perceptions that the government, far from being united behind Malcolm Turnbull, is still bitterly divided.

Just how disunited will depend very much on how Mr Abbott and his conservative allies play the game in the months leading up to the election. Mr Shorten will be praying they continue on in the vein of recent months.

In his renomination statement the dumped Liberal leader did not mention his willingness to work long and hard for the re-election of the Turnbull Coalition government.

No, he expects us all to believe his primary purpose for batting on is to serve the people of his Warringah electorate. He says he is looking forward to working with NSW Premier Mike Baird to ensure that the Warringah peninsula gets better transport links to the rest of Sydney.

Churchill suffered in the wilderness for years. Ruminating on the backbench while his party, tired of war and confrontation, chose appeasement instead.

The Tories then came cap in hand when their “folly” was exposed with the rise of militant Nazism.

Ah, the prospect of reviving ambition and wreaking revenge.

Mr Abbott and his cronies already see Mr Turnbull as soft on security in the face of the threat of Islamic extremism.

They made no secret of that, even while the Prime Minister was out of the country and being feted in the White House.

It looks like what it is: undermining. And it’s a fault line that threatens to rock Liberal party pre-selections in New South Wales.

An agenda a majority of Australians embrace and think he does too.

Mr Abbott is more than a lightning rod for internal party dissent; he is an instigator of it and an aggressive leader of the hardline conservatives.

Mr Shorten in his Australia Day speech will allude to this conflict.

He’s encouraging voters to see that he’s a passionate republican, captive of the man he deposed.

And that he’s unable to deliver the final step in Australia’s journey to truly independent nationhood for fear of sparking an internal party revolt.

Mr Turnbull will certainly not be pushing his luck on the issue at this time. But he is encouraging Peter Fitzsimons and the Australian Republican Movement to mobilise public opinion. They are working hard at it.

That’s probably the best result republicans can hope for, but if it joins a longer list of dashed expectations, voters may begin to embark on a broader rethink.