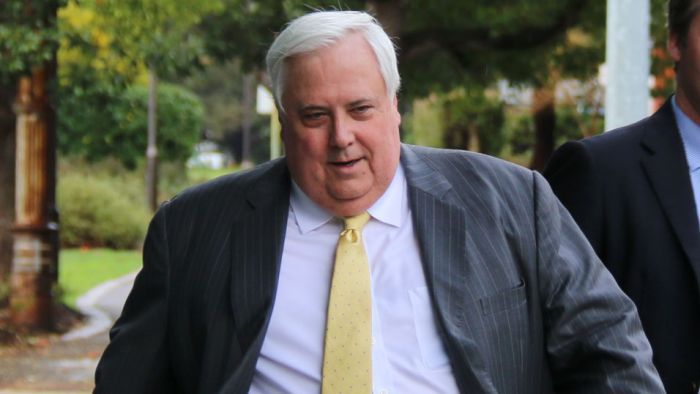 Clive Palmer is facing mounting pressure to repay more than $6 million funnelled into his own political party from his struggling Queensland nickel refinery.

On Friday Mr Palmer’s Queensland Nickel plant in Townsville laid off more than 200 workers, telling them their jobs were no longer viable.

And on Saturday figures released by the Electoral Commission of Queensland revealed Queensland Nickel donated $288,516 to PUP on December 31, just a fortnight before letting staff go.

Local federal LNP member Ewen Jones said Mr Palmer, the federal member for Fairfax, should pay the millions of dollars back to the refinery.

“It beggars belief, to be quite honest, you can have what was going on in December between Mr Palmer, Queensland Nickel, (managing director Clive) Mensink and the Queensland Government and they turn around and say they can donate another $290,000,” Mr Jones said.

“I think the workers at Queensland Nickel are very fatalistic at the moment.

Mr Palmer was in discussions with the Queensland Government for a $35 million bailout to keep the nickel operation at Yabulu near Townsville afloat but was knocked back late last year.

Senator Xenophon said it’s time Mr Palmer revealed exactly what’s really been going on and made a proper effort to look after his workers.

“The fact is millions of dollars of money from Clive Palmer, from associated entities, have gone into his political party and it seems to have ended in tears,” the South Australian senator said in Brisbane on Saturday.

“He needs to be up-front with Queenslanders, but most importantly to his workers.

“The way they were dismissed was something that did not have a lot of dignity about it for his workers.”

“What we have said all the way through is that this is principally a private decision and Clive Palmer should be better managing his own affairs,” Mr Springborg said.

“We don’t expect the Government to come in and bail out private businesses — that is not the role of government.”

Queensland Nickel blamed low commodity prices and a lack of financial support from the State Government for its decision to sack the workers.