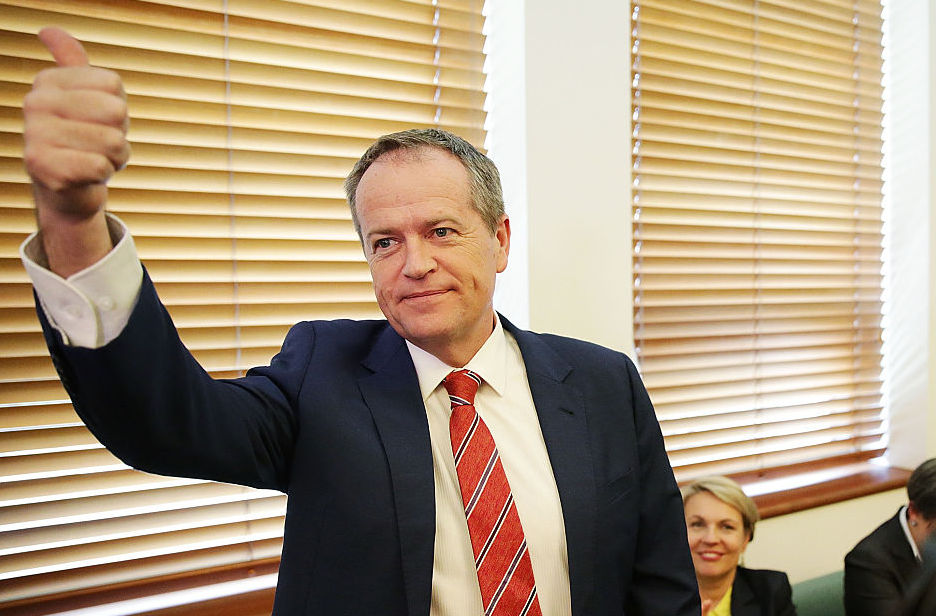 Sometimes it’s hard not to feel sorry for Bill Shorten, the Opposition Leader who was flying high in the opinion polls when Tony Abbott was Prime Minister but who plummeted to near record-breaking lows once Malcolm Turnbull became PM.

• The best 2016 election date the PM could choose
• Phone Bill: Shorten sorry after caught texting at the wheel

While the onset of the shiny new Turnbull era seemed to dazzle voters and journalists alike, Mr Shorten looked increasingly hapless. Even his dad-jokes and zingers fell flat.

But talk of a GST has given the Opposition Leader new cause for hope. Having seen it done twice before, Mr Shorten has hitched his wagon to the anti-GST cavalcade in the hope of using voter anxiety about increased living costs to annihilate his opponent.

In doing so, Mr Shorten is modelling himself on two distinctly different politicians: former PM Paul Keating, who destroyed the Liberals’ John Hewson over a proposed GST; and former Opposition Leader Tony Abbott, who did the same to Julia Gillard with the carbon tax.

No matter that the Turnbull Government hasn’t yet made a decision to increase or broaden the GST – Mr Shorten has adapted Mr Abbott’s brutally effective “great big new tax on everything” campaign to suggest the changes to the GST are already a done deal.

Not only are there petitions and videos, but Mr Shorten started a three-week anti-GST mini-campaign this week, doing his best Abbott-imitation in a supermarket near you, claiming Mr Turnbull is “too weak to visit these communities and talk to people about his plans for GST on everything and to cut penalty rates”.

Cos you asked @workmanalice – my favourite lettuce is one that doesn’t have a 15 per cent GST on it. pic.twitter.com/2DChKdws0D

Mr Shorten seems unfazed by the fact the Government has no actual policy to cut penalty rates either.

Another stroke of political good luck for the Labor leader was the implosion of former minister Jamie Briggs, who resigned from office because of his “inappropriate behaviour” towards a female government employee. Immigration Minister Peter Dutton then doubled down on the Government’s woman problem by calling a journalist a “mad f*cking witch” in an SMS, which he proceeded to accidentally send to the scribe in question.

Labor joined widespread criticism of the inherent sexism on display through Mr Briggs’ and Mr Dutton’s actions, but that high moral ground was swept away from beneath Mr Shorten’s feet this week when accusations of physical intimidation and sexual harassment resurfaced against NSW Labor general secretary, Jamie Clements.

The Opposition Leader initially responded by calling for a report into the matter, but as two former NSW premiers lined up to tell the media that Mr Clements must go, Mr Shorten was left with no choice than to follow suit.

Mr Clements rebuffed a call from Mr Shorten’s chief of staff to resign, so the Labor leader had to call Mr Clements himself.

So after a relatively poor start, Mr Shorten secured Mr Clements’ departure and came out of the matter looking no worse for wear. But the alternative PM still has to deal with the rampant sexism and bias against women that has reportedly been uncovered in the NSW Labor Party, and which has been exposed by Mr Clements’ accuser, Stefanie Jones.

Mr Shorten will have a hard time convincing women to vote for Labor if he remains as apparently oblivious to the existence of prejudice against women within his own party as he was on Friday.

Speaking in Tasmania, the Labor leader said “I believe fundamentally that women should participate equally in Australian politics with men. The Labor Party’s got a strong track record of standing up for the right of women to participate in politics. Currently Labor has 44 per cent of its representatives are women and we want to lift that number.”

Problematically for Mr Shorten, Labor’s Tasmanian branch hasn’t lived up to its leader’s lofty standard. Through factional deals involving the state’s dominant unions, Labor has relegated the young and talented shadow minister, Lisa Singh, to fourth and unwinnable position on its Tasmanian Senate ticket. The factionally unaligned Senator Singh was moved to make way for a male former union official.

Not only are unions continuing to dictate who the ALP preselects for the upcoming federal election, some Labor-aligned unions such as the CFMEU are also hedging their bets by pouring funds into the election coffers of the Australian Greens.

This also places Bill Shorten in an uncomfortable position, given the CFMEU forms part of his power base and he is dependent on their votes within Labor’s key decision-making bodies.

Loyalties are sure to be further tested during the election proper. Will Labor preference the Liberals in an effort to fend off the Greens in inner city seats? And to whom will the unions devote their considerable on-the-ground campaign resources?