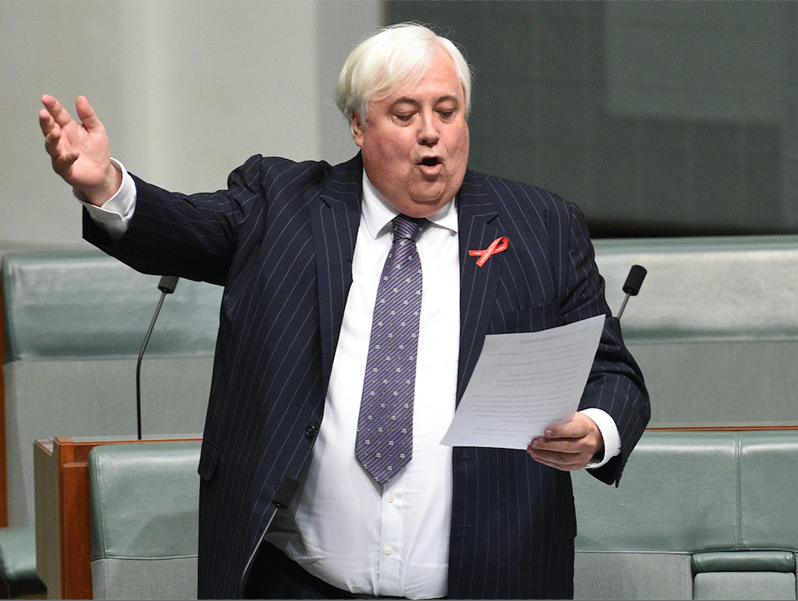 Independent MP and mining magnate Clive Palmer has shown Australia his caring side via an unusual week-long Twitter soliloquy.

The Victorian-born, Queensland-based MP is better known for outlandish comments and tantrums during interviews, however it seems over the new year Mr Palmer has become a more considered, thoughtful and philosophic human being.

Mr Palmer finished 2015 defending himself against reports alleging his mining empire was ailing and his mismanagement was leading to employee anger and the decline of his riches.

However, it seems he is trying to turn over a new leaf with a newfound focus on women’s rights, children’s welfare and world peace.

This week, in 18 short yet poignant tweets, Mr Palmer shared his thoughts and some of them were pretty deep.

The cyber monologue began on December 29, 2015, when Mr Palmer sent this love-filled tweet:

Just too much hate in the world. Forgive your enemies

This was followed by a brief interlude about mining, but Mr Palmer’s language was much less brash than it usually would be when discussing the minerals that brought him his wealth, linking it to “lower living standards”.

After a short break to presumably ring in the new year, Mr Palmer was back on January 3, 2016, to talk women’s rights. He sent six tweets on the topic that day including this one:

He then sent two more over January 4 and 5:

Women remain the dominant gender in low income jobs. We need to change it.

On the January 5 and then into the January 6, Mr Palmer began thinking of the children, particularly the plight of indigenous children.

The infant mortality rate is twice as high in the indigenous community. Why? — Clive Palmer (@CliveFPalmer) January 4, 2016

All children are entitled to our love and protection. — Clive Palmer (@CliveFPalmer) January 4, 2016

But it was his last tweet on January 6 that was the most philosophical of all.

Ironically this statement of peace came from the man who once sent these ferocious tweets.

We should put the #PublicServants & #Minister in detention and see if they like sexual abuse. We need to free these children from detention — Clive Palmer (@CliveFPalmer) October 12, 2015

Dont be a fool. #Liberal #Labor & #Greens dont care about Australians. They are more interested keeping their snouts in the trough #auspol

And that’s not to mention his two infamous videos filmed solely for the purpose of celebrating the un-ceremonial dumping of former Speaker Bronwyn Bishop and Former Prime Minister Tony Abbott.