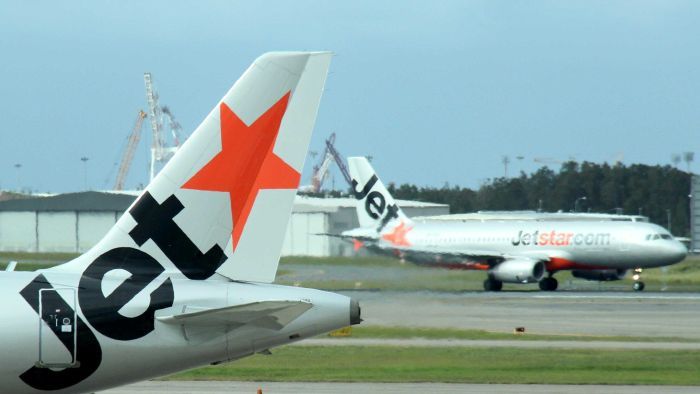 Jetstar has cancelled a number of flights, affecting thousands of passengers, as the airline seeks to minimise disruptions from planned industrial action. Photo: Getty

A Jetstar flight heading from Melbourne to Singapore has turned around while above the Timor Sea and landed in Darwin, after the pilot noticed one of the flight instruments was faulty.

Flight JQ7 left Melbourne about 12:30pm (AEDT) on Monday and was travelling towards Singapore when it turned around mid-flight, landing at Darwin International Airport at about 4:30pm (ACST).

The plane was met by emergency vehicles as it landed.

• Fake bomb on flight forces emergency landing
• Why do you always get sick on holidays?

“Following a brief period of turbulence, the captain of a flight from Melbourne to Singapore identified a technical fault with one of the instruments on the flight deck and opted to divert to Darwin as a precaution,” a Jetstar spokeswoman said.

“Engineers will inspect it this evening before clearing it for service.”

Some of the passengers were unhappy with the situation, and said they only realised something was wrong when the plane’s flight path began to show the aircraft was returning to Australia.

“It appeared the plane was going backwards, which didn’t look right,” said one woman, who was on her first overseas trip.

“All I heard was something about ice impairing the reliability of something on the plane.”

She said the turbulence they experienced was not too bad.

“It would be really intense for a bit, then it would stop,” she said.

Another man said he had heard there was a problem with a sensor.

He said he was annoyed the plane had turned back part-way through the journey.

“It is terrible. We are meant to be in Singapore right now, but we are stuck in Darwin,” he said.

“No one really told us what was going on. The turbulence wasn’t that bad. I thought we could have kept going through it.”

Jetstar is yet to report which flight instrument on the plane was faulty.

The plane is now stranded in Darwin until Tuesday morning.