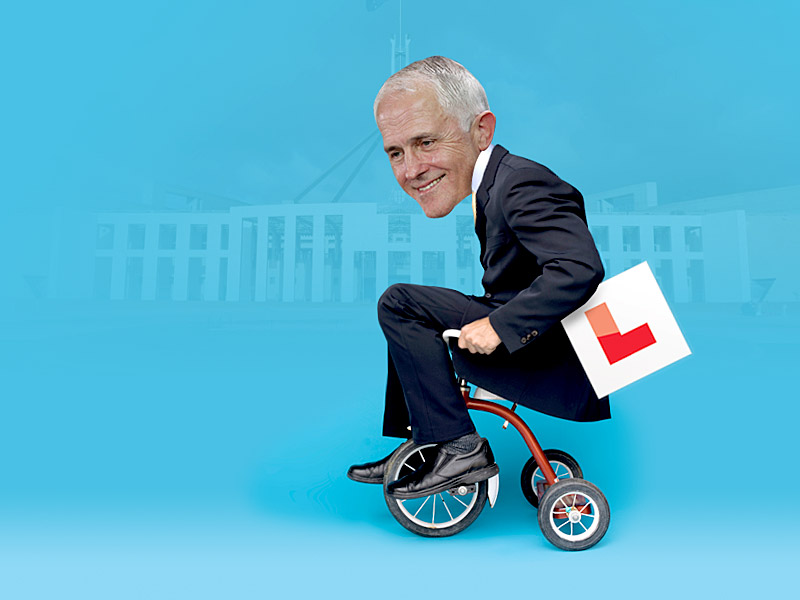 The Turnbull Government had its first real test this week, announcing the mid year budget update (known as the Mid Year Economic and Fiscal Outlook or MYEFO).

You might recall the wheels on the Abbott Government became decidedly wobbly when it released its first budget in 2014.

This time it was Treasurer Scott Morrison’s turn to roll out a shiny new economic statement, albeit only the mini-version that is customary at this mid-point in the financial year.

Mr Morrison and Mr Turnbull’s challenge was to balance two seemingly inconsistent objectives. The statement had to be economically responsible enough – that is, make enough budget cuts – to get the deficit back under control so that economic commentators would be satisfied. But it also had to be politically sensitive enough not to piss off too many voters.

That essentially meant making budget cuts that didn’t adversely impact anyone, which is bottom-of-the-garden economics.

Our trainer-wheel Treasurer was unsteady on this first major outing, apparently losing touch with the charismatic salesman that his supporters claim Mr Morrison to be. At least he refused to paint himself into a corner with arbitrary dates by which the budget will be returned to surplus.

In doing so the Treasurer took the first step in dispelling the hoary Howard-era myth that good economic management can only be measured by the size of a government’s surplus. This nonsense was only ever a stick with which to beat big-spending Labor governments, and which now is hovering over the Turnbull Government’s uncomfortably exposed arse.

The response to MYEFO from Labor and the Greens indicates that demonising the business sector is paying rich dividends for the opposition parties.

Building on the anti-corporate self-promotion campaign initiated by Labor’s answer to Miley Cyrus, Senator Sam Dastyari, Australian-based multinationals in particular have been kicked from pillar to post this year as non-government parties looked for alternative ways to (hypothetically) raise revenue, score brownie points with voters, and wedge the Coalition for not cleaning up the tax affairs of their major donors.

Online bullies let the side down

Politics is meant to be a contest of ideas, but it appears having a different opinion to the left-leaning majority on Twitter is becoming less and less acceptable. Twice this week, prominent women earned the ire of the Twitterati for not toeing the progressives’ line.

Firstly Health Minister Sussan Ley copped violent and sexist abuse on the social media platform for admitting in an interview that some Australians may indeed be left worse off by changes to pathology and x-ray charges announced in the mid year budget update.

Then the vile torrent was directed at ABC journalist Leigh Sales for giving Labor leader Bill Shorten a tough time during an interview about his links with the union movement.

Aside from the destructive nature of such behaviour, this is a very poor look for the progressive side of politics. Much of the bullying is coming from the same people who decried conservatives’ abuse of former PM Julia Gillard.

Whose side are Liberal conservatives actually on?

Liberal arch-conservatives did themselves no favours this week when they publicly complained about being counselled by the head of ASIO to tone down their anti-Muslim language.

It’s no secret that Tony Abbott and co’s preferred method of tacking terrorism – to blame Islam – is doing the opposite by inciting feelings of ostracism and resentment within the Muslim community.

If Mr Abbott’s supporters are only speaking out against Islam, as they claim, out of concern for the Australian community’s safety, they should be heeding the advice of the nation’s terrorism experts.

If they choose not to, any further inflammatory statements from the Abbott camp can only be seen for what they really are – part of the sour grapes campaign aimed at making life difficult for PM Turnbull, at any cost.

Finally, spare a thought for the poor former Industry Minister, Ian Macfarlane, whose attempt to sidestep his way back into the ranks of relevance was thwarted by wiser heads in the Queensland Liberal National Party.

Mr Macfarlane will now be considering his options for the future over the summer break. Turnbull looks shaky on his trainer-wheels