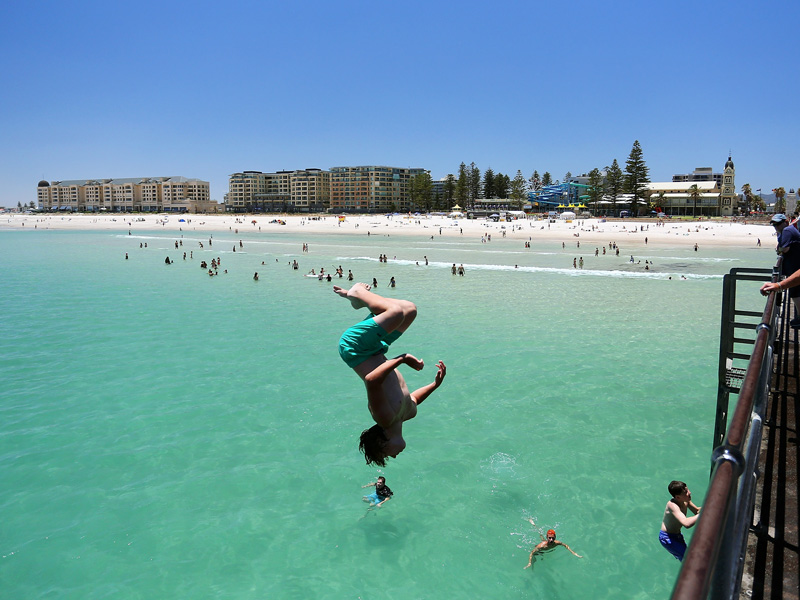 An “unusual burst of extreme heat” will move through Australian capital cities over the next few days, as summer starts to rear its hot head.

However, those forecasts came amid a tornado in Sydney on Wednesday, where a “supercell thunder storm” ripped through parts of the city, damaging homes and properties with the worst hit area being Kurnell, described as a “disaster zone”.

For the remainder of the week, Melbourne, Adelaide and Canberra will be forced to endure conditions up to and over 40 degrees Celsius.

• Three injured, damage in Sydney tornado
• What you need to know about the coming heatwave
• The weather ‘double whammy’ hitting us hard

This video, courtesy of Weather Zone, shows how the heat will affect the eastern part of the nation for the next few days.

The hot weather will begin in Melbourne on Thursday with 33C forecasted and temperatures in the high 30s inland.

“The heat’s already arrived in northern Victoria. It’s been fairly warm up there with temperatures in the mid-30s,” BoM senior forecaster Richard Carlyon said.

“[On] Saturday, a northerly wind will be fresh all day and that means we’ll get the full brunt of the heat, up to 39C.

Click here to see incredible vision of the Sydney tornado

“Some suburbs could easily reach 40 degrees.”

The overnight low on Saturday night in Melbourne will be 24C.

The forecasts for your city:

A warm yet grey Christmas Day?

According to Weatherzone’s forecast for Christmas Day, most of the nation’s capital cities will be warm, yet cloudy and possibly rainy.

Out of all our capital cities, Hobart (24C) and Perth (31C) are the only ones tipped to enjoy any sun with their Christmas lunch.

The South Australian capital will suffer through a heatwave until Sunday after already enduring several days of heat this week.

Senior climatologist Darren Ray said a six-day run of such temperatures had only been recorded three times during November and December since European settlement.

Mr Ray said such temperatures were not normally seen until the “height of summer, late January and early February”.

“It’s certainly an extreme burst of heat and that run of six days of 35C or more has only happened three times in Adelaide’s entire temperature record for November and December,” he said.

Adelaide has experienced several hot spells throughout November and December, recording its hottest December night in more than a century last week when it reached 33C before 4am.

He predicted temperatures would become “a fair bit milder” in the run into Christmas.

Fire danger ‘high’ and ‘extreme’ due to heatwave

The ACT Emergency Services Agency said the fire danger rating meter would be set to high from Thursday to Sunday, despite the extreme temperatures.

Winds are expected to be light, preventing the fire danger reaching extreme levels.

The risk of fires will also remain high throughout the heatwave for Adelaide and Melbourne.

On Saturday, all of Victoria except for East Gippsland (high), will have a very high or extreme fire danger rating.

A spokesperson for the Country Fire Service South Australia said that fire danger ratings and fire bans were being monitored on a day by day basis.

Warnings for the next day are given at 4pm every afternoon.

While strong winds and dry “fire fuel” was not expected to cause any major fires in the region, the CFS warned all South Australians to be on alert while the weather was hot.