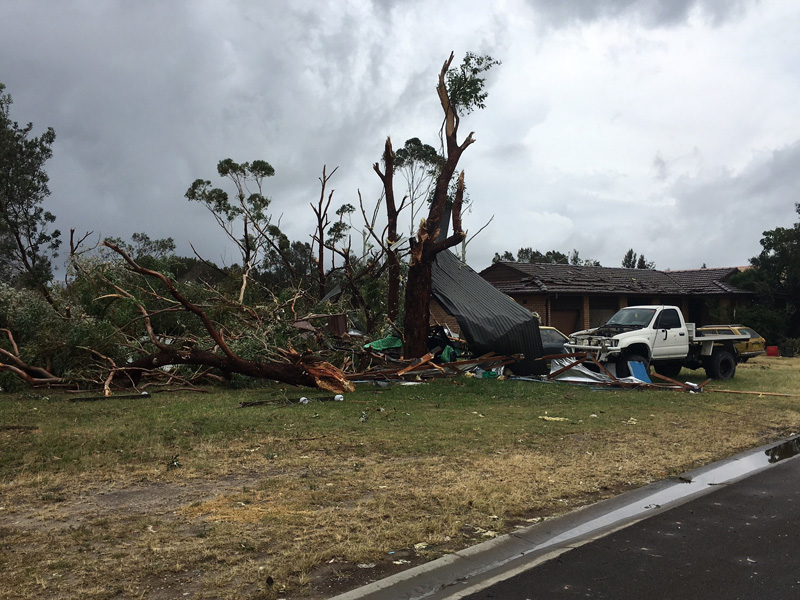 A tornado with winds clocked at 213km/h has wreaked havoc south of Sydney at Kurnell, ripping roofs from homes while destroying power lines and trees.

It is believed at least 25 homes have been badly damaged.

Dramatic footage posted to social media by Andrew McGregor showed the force of the wind and rain, which lashed Kurnell at about 1pm (AEDT) on Wednesday.

The wild weather also struck the town’s Caltex oil refinery, which had to be evacuated, although no major damage was reported.

Emergency services responded to over 500 emergency calls during the “super cell thunderstorm”.

The storm caused chaos when it flattened sheds, smashed windows, ripped trees from the ground and caused a truck to turn over – mostly in Kurnell.

The weather bureau’s Michael Logan said the wind speeds recorded were “up there” with the fastest ever registered in the Sydney area.

“We don’t get situations like that without it being a tornado,” he said

“It is what’s called a super cell thunderstorm and they’re one of the most dangerous thunderstorms we get.”

Mayhem ensued at Sydney airport as cancelled flights forced terminals to close and traffic to build up on surrounding roads.

The mall at Bondi Junction also flooded thanks to the rain, while video on social media showed sewers under Sydney streets bursting with geysers of rainwater.

Kurnell is one of the most environmentally fragile parts of Australia.

For many decades it was the chemical manufacturing hub of Australia hosting big polluters such as Orica and Caltex.

Historically, severe rain events have triggered toxic releases from such facilities and parts of the suburb are now the focus of multi-million dollar chemical removal and remediation programs.

Kurnell’s small residential population is exposed to dangerous levels of mercury and arsenic in the local environment.

An emergency services spokesman said that chemical vapours were present throughout the suburb following the first windstorm that hit the area on Wednesday morning.

A spokesperson for the New South Wales Environment Protection Authority said it had despatched incident coordinators to Kurnell after the first storm cut sewerage and electricity services.

“We are keeping an eye on the situation,” a spokesperson told The New Daily.

A spokesperson for the Sutherland Shire Council said that a community meeting had been called for 7pm Sydney time to update homeless residents about emergency accommodation and other support services available.

Electricity is not expected to be restored in Kurnell before Thursday evening.

As people begin to return home after the storm, police warned residents to not disturb debris as it could possibly contain asbestos.

Houses built before 1987 may contain asbestos and if they were damaged in the storms, superintendent Michael O’Toole has recommended people wear a protective mask and clothing before entering the property.

“People should take general safety precautions. We have been advised the risk is low if debris is not disturbed,” he said on Wednesday evening.

While much of the damage occurred in Kurnell, the storms also caused a drenching in the NSW Central Coast and Sydney.

Phil Campbell from the SES at Kurnell told 702 ABC Sydney emergency crews and residents were assessing the damage, while some were taking cover in the evacuation centre at a nearby RFS station.

“One lady said she had nothing left,” Mr Campbell said. “She was just sitting there resolutely in a blanket saying her house had been completely destroyed.”

He said there could be up to 25 homes with significant damage so far in the area.

“We’re seeing homes that are completely unroofed, others with very significant structural damage,” Mr Campbell said. “There’s a lot of insulation and other debris scattered right across parts of the peninsula.

“We’ve got many, many powerlines down. In fact, the entire peninsula at the present time is without power.”

See more footage of the storm below: ‘I am not afraid’: The modern unknown soldier risks it all in Ukraine
Energy market reform will be a big boost for emissions reductions: Chris Bowen
Greens sign up for Labor’s looming jobs-and-skills summit as Liberals stick with boycott
Joe Biden’s $430b green victory for the environment
China cementing its Thailand ties with joint military exercises
NRL: Titans frantic to end 10-game losing streak as Manly showdown looms
Australia’s top Google searches of 2015 revealed
Today's Stories