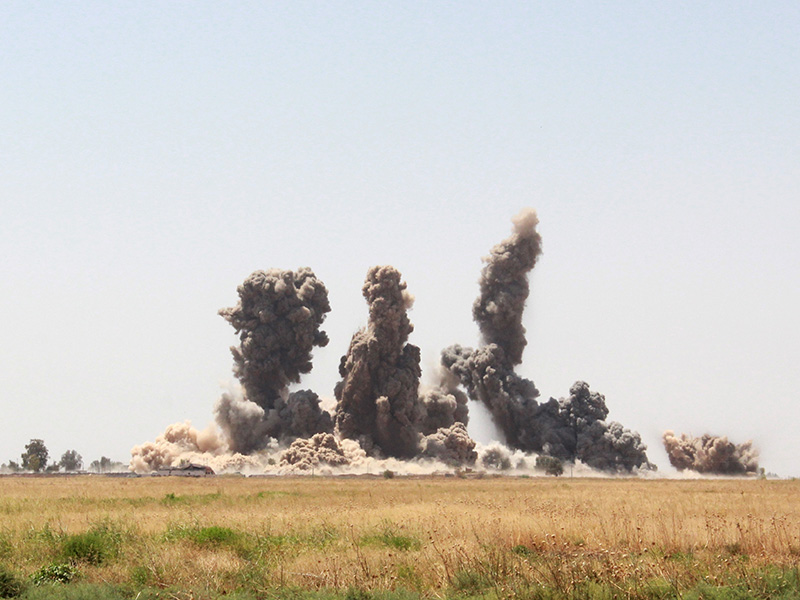 Australian combat aircraft launched 73 strikes against Islamic State forces in Syria last month, according to new figures released by the Australian Department of Defence. But the ADF is refusing to say how many lives the bombs claimed.

The figures also show that RAAF pilots made 998 sorties totalling 7648 hours of flying time over Iraq between September 2014, when Tony Abbott took Australia back to war, and November 2015. Of these sorties, 641 involved bomb drops.

Mr Abbott announced a week before he lost the Liberal leadership in mid-September this year that the Iraqi air campaign would be extended into Syria.

The updated ADF figures are bound to inflame the debate over Australia’s involvement in the two war-torn countries.

Clive Williams, Adjunct Professor at the Australian Defence Force Academy, said it had been foolish for Australia to get involved.

“Most people in strategic studies are saying the airstrikes won’t achieve anything in terms of a political outcome,” he told The New Daily. “There are a lot of negative aspects.”

No official estimates of casualties are ever made public and the Australian government does not make available details on its specific targets. The only target information is released by US Central Command, with Australia’s involvement included in the larger Coalition tally.

The executive director of the Australia Defence Association, Neil James, defended the lack of public information.

He told The New Daily the spike in bomb drops in November could simply represent the ebb and flow of war: “Our type of target and the general rules of engagement are the only things the people need to know. We are fighting a war. Operational security considerations must have primacy. The representatives of the public, the politicians, are fully appraised.”

The volunteer group Iraq Body Count recorded 19 people killed in the IS-occupied city of Mosul in northern Iraq from coalition strikes on Monday. There is a fresh body count every day.

Despite specific questions from The New Daily, both Prime Minister Malcolm Turnbull and Defence Minister Marise Payne failed to provide an explanation for the increase in Australian bomb drops.

A Defence spokesman said the government did not release information on specific strikes because it could be misused by Islamic State to manufacture false claims and undermine the legitimacy of the Australian Defence Force.

“Defence will continue to provide information to the Australian media through routine operational updates provided by the Chief of Joint Operations and media releases that address significant events,” the spokesperson wrote.

Critics argue that with no clear strategy, and hostage to American military interests rather than our own, the bomb drops are counterproductive and a considerable waste of money and resources.

Former secretary to the Department of Defence Paul Barratt described Australia’s involvement in Iraq as insanity: repeating the same mistake and expecting a different result.

“The Americans have always been more relaxed about collateral damage than we are,” he said.

“We went through the whole of the Iraq War with the Americans saying we don’t count the bodies. I expect Australia is targeting munitions dumps, training camps, isolated targets that can do damage but not run the risk of civilian casualties.”

General information about the activities of the Air Task Group, including missions flown and munitions dropped is available at: http://www.defence.gov.au/Operations/Okra/ATG.asp