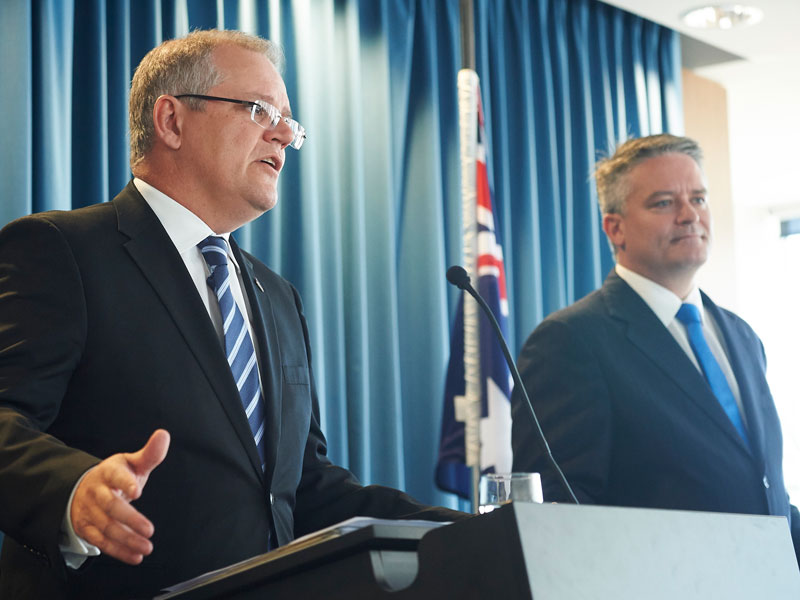 You have to hand it to politicians when they announce debt is up, spending is up and growth is down that they can still claim they are on track to the nation’s favourite holiday destination of budget surpluses and boundless prosperity.

As in everything political, it’s all about perception. As long as you look like you know what you are doing and sound good, you’ll be marked up.

Labor, in the end, didn’t pull it off. Tony Abbott and Joe Hockey crashed at the first hurdle. The big question is: will Malcolm Turnbull and Scott Morrison get away with it?

• Down, down, the economy’s down!
• Budget deficit increases to $37.4 billion
• Turnbull fends off bolshie Nationals over Macfarlane
• Tim Flannery: the biggest surprise from the Paris climate meeting

On the day the nation was told in the Mid-Year Economic and Fiscal Outlook (MYEFO) that the budget is drowning in a sea of red ink, the latest Morgan Poll says the government is pulling further away from the Labor opposition.

Just as well for the government’s economic spruikers. They will need all the credibility they can muster to sell the message that despite the fact their numbers are worse than Labor’s in government, they are doing a better job.

There’s no doubt Wayne Swan would not have been allowed to get away with it, and of course if Mr Abbott and Mr Hockey were still in charge they – like the budget – would be plunging deeper into the red ink of voter disapproval.

So for now we are given $10.6 billion worth of savings to cover $10.2 billion worth of spending. Labor has a point when it says this Liberal government has gone to the usual victims to find the cash: welfare recipients, patients and the elderly.

And despite this the deficit is still blowing out to $37.4 billion, up from $34 billion in the May budget.

Evidently we can forget looking to raise revenue from the wealthy. No talk of taxing multi-millionaire superannuants. We have to wait to see that sort of courage.

Mr Morrison is still insisting that he is addressing a spending problem and not a revenue problem. Credible economists like Saul Eslake and Chris Richardson insist there is no way of addressing the structural budget deficit left to us by the Howard government and uncorrected by Labor without raising taxes.

Either that or cut even harder, and this time target some of the government’s favourite rent seekers in business and mining.

Mr Richardson, on Channel 10’s The Project on Tuesday night, said the budget forecast was based on several unlikely assumptions.

“There’s a better chance of the Kardashians becoming nuns, Donald Trump becoming president of Islamic State (or) Clive Palmer becoming bachelor of the year,” he joked.

As we enter 2016 it will get harder for Mr Turnbull and Mr Morrison. It is an election year. The sunny rhetoric will help. And maybe a budget that pushes all the hard decisions out beyond this year will buy them time.

Luckily for them voters do realise no matter who they vote for, a politician gets in. At least Prime Minister Turnbull, if the polls are right, has plenty of political credit to count on.

For the good of the nation he will need to start spending some of it soon.

Budget repair a slow and steady race for Coalition