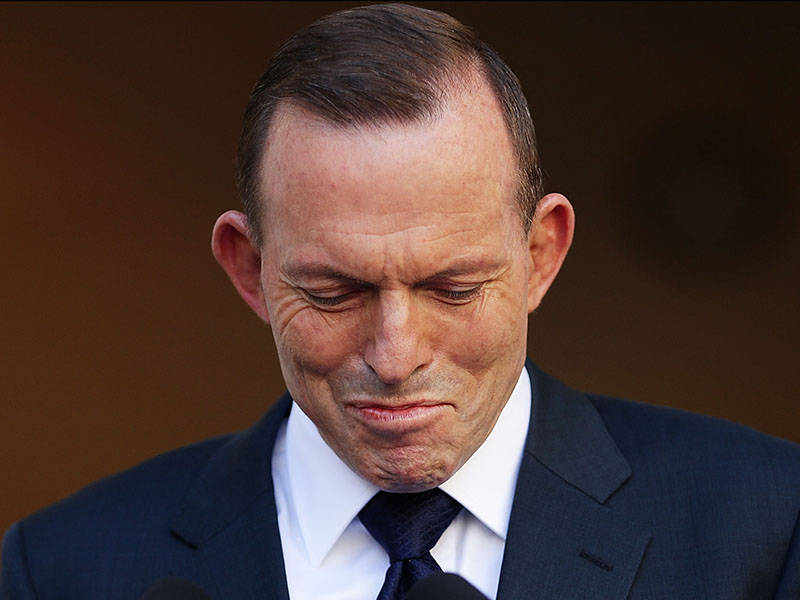 There’s nothing quite so pathetic as a self-deluded has-been politician, desperately trying to squawk their way back into the political spotlight, but in so doing only reinforcing the reason they were relegated to feather duster status in the first place.

Granted, there’s been a handful of former MPs who successfully made the transition from parliamentary rooster to wise party elder. But it seems that for every John Howard or Paul Keating, there’s also been a Pauline Hanson or Mark Latham.

And now we have the most recent former prime minister, Tony Abbott, clutching at the last straws of political relevance as he struggles to remain in the public spotlight.

Maintaining the rage against Islamic State has become Mr Abbott’s last resort against fading political irrelevance, allowing him to fire up the conservatives while pissing off the lefties.

Since being deposed only a few months ago, the former PM has wasted no time writing columns, delivering speeches and giving interviews to call for Australia to strengthen its efforts to combat terrorism and deploy grounds troops overseas to fight IS.

Yet in the past week Mr Abbott seems to have ratcheted up his own efforts, not only publishing a tabloid opinion piece, but also delivering a speech overseas and granting two in-depth interviews to sympathetic shock jocks.

In doing so, Mr Abbott waved away any concerns that the western invasion of Iraq may have fomented terror-based resistance groups such as IS, and instead laid the blame for extremist Muslims at the feet of Islam. In doing so he essentially demanded the religion reform its own basic tenets in order to combat terrorism.

If Mr Abbott truly believes this approach is the solution to violence waged in the name of religion, no doubt the great reformer’s next move will be to call on the Pope to change the Catholic tenets used by extreme right-to-life advocates to justify the terror they wage at abortion clinics throughout the western world.

But let’s not hold our breath waiting for this to happen.

In reality Mr Abbott’s utterances are not about fighting terrorism, but protecting his legacy and making life as difficult as possible for the man who replaced him as prime minister.

The not-so-humble backbencher now nurses an ambition to return to his rightful role – the prime ministership – and has selected the comeback kid, Kevin Rudd, as his role model.

This is somewhat counterintuitive; given Mr Abbott never achieved the heights of popularity attained by Mr Rudd.

After his ousting, the Ruddster built on an already respectable level of popularity, recruiting new followers through the canny use of social media. Unlike Kevin Rudd, and more like Pauline Hanson and Mark Latham, Mr Abbott’s approach to bolstering his poor approval rating seemingly involves the incitement of hatred and fear in the community.

Indeed, like Mr Rudd, Mr Abbott claims to be here to help, telling one of his interlocutors this week: “If I defend the legacy of my government, I’m helping the foundations of the Turnbull government.”

That may be so, for even though feather duster Abbott’s squawks are unedifying, they at least remind voters the Turnbull government may not be perfect but it’s still a sight better than an Abbott government.

That’s not to say Mr Abbott isn’t succeeding in making life difficult for Malcolm Turnbull. The current PM is clearly smarting from the conservative camp’s accusation that he’s soft on terrorism.

So this week the PM decided to up the ante, but not in an aggressive fashion, asking the states and territories to agree to keep convicted terrorists in jail once their sentences expire if they show no prospect of rehabilitation.

The measure will concern the human rights community, but will likely go down well with most other voters who will feel somewhat assured by the additional protection.

Once more into the breach, dear friends!

Less reassuring was news during the week that former Speaker Bronwyn Bishop was keen to stay on beyond the upcoming election so that she can fight terrorism.

Nevertheless, Liberal factions are squabbling over the septuagenarian’s safe Sydney seat, and deals are being done that would make a Labor factional warrior blush.

At least there is one political has-been – unlike Mrs Bishop and Mr Abbott – that PM Turnbull no longer has to worry about. One of Canberra’s worst kept secrets was finally revealed this week when former Treasurer Joe Hockey was announced as the next Australian ambassador to Washington.

What did come as a surprise was Mr Hockey’s candour about his retirement from politics. Showing more honesty than most politicians who’ve fallen at the hands of others, Mr Hockey said if he had stayed in parliament “it would [have been] overwhelmingly about getting even with people that brought me down.”

Perhaps it is Mr Hockey who should be Mr Abbott’s role model, and not Mr Rudd. Revenge may indeed be sweet, but as Mr Rudd showed, there is little point returning to the top job if one’s own government and party have essentially been destroyed in the process.