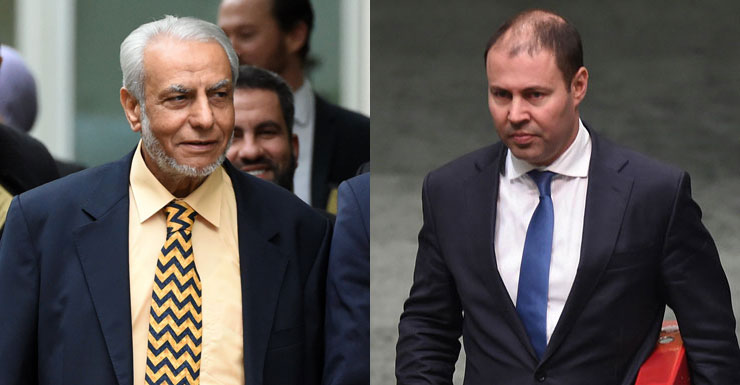 Liberal frontbencher Josh Frydenberg has attacked Australia’s most senior Islamic cleric for his “graphic failure” of leadership after the Paris terrorist attacks, but has stopped short of calling for his resignation.

“He sought to cover that up subsequently, but it was a graphic failure and he has more of a responsibility not only to the Muslim community but to the community at large,” he said on Sunday.

• Did the Grand Mufti get it wrong?
• Andrew Macleod: troops would be in Syria for years
• Thousands march against global warming
• Prince Harry’s dramatic fall in charity polo match

In his first statement after the assault on the French capital that killed 130 people, Dr Mohammed expressed his deepest condolences for the victims while saying causative factors such as racism and Islamophobia had to be addressed.

In a follow-up statement days later, he said there was “no justification for the taking of innocent lives”.

“You only make a clarification after you realise the response of your first comment,” Mr Frydenberg said.

Asked if the Mufti should resign, Mr Frydenberg said he needed to show greater leadership.

“As for his future, that’s a question for the Muslim community,” he said.

He wanted to hear the “moderate views” of Muslim leaders because “clearly we’re not winning the battle of hearts and minds” of the Muslim community.

Mr Frydenberg, fresh from Paris where he said he saw a city of 10 million brought to its knees, also rejected Victorian Premier Daniel Andrews’ view that violent extremism was now part of contemporary Australia.

“I say no, that’s rubbish, I will not accept that,” he said.

Opposition deputy leader Tanya Plibersek said there was a genuine security threat in Australia, which could be reduced by supporting the intelligence and security agencies, as well as building community support.

“The most important partners we have in the fight against violent extremism is the Muslim community, our former head of ASIO said so,” she told reporters in Sydney.

Greens senator Sarah Hanson-Young said she didn’t know why the government would want to be picking a fight over semantics and called on Prime Minister Malcolm Turnbull to bring his frontbench into line.

“Let’s put aside the war of words and focus on how we work together to ensure young people aren’t exploited,” she told reporters in Canberra.

A spokesman for Mr Andrews said in a statement recent events in Victoria and NSW showed “no one should bury their heads in the sand when it comes to the threat of violent extremism”.