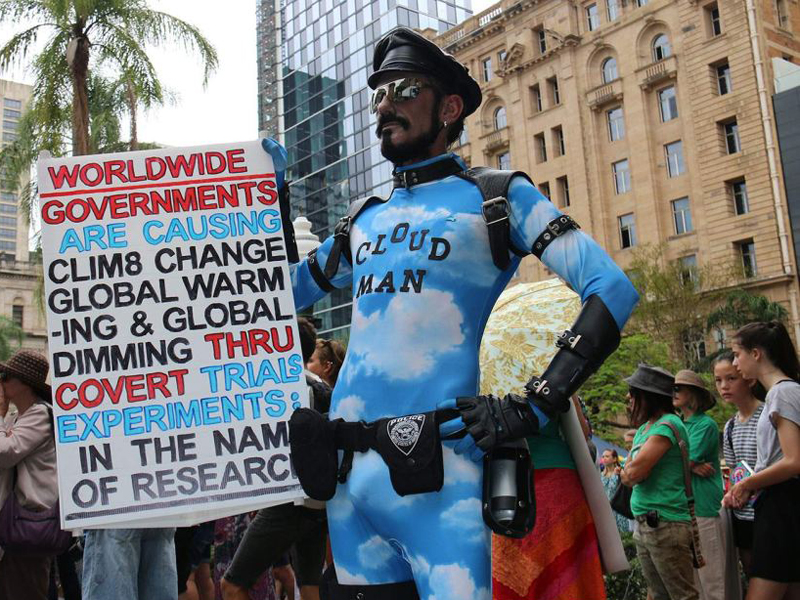 Thousands of Australians have joined a worldwide wave of marches on the eve of United Nations climate change negotiations in Paris, calling for stronger measures to combat global warming.

Events are being held in Sydney, Canberra, Perth and Hobart, as well as regional and rural towns around Australia, joining about 600 other cities in more than 120 countries around the world.

Protests have already taken place in Brisbane, Melbourne and Darwin.

In Sydney, thousands of people gathered in The Domain ahead of a march to the Opera House.

Doctors, firefighters and religious leaders were among the crowd, calling for governments to keep temperatures from rising by more than 2 degrees Celsius – the limit scientists say would trigger dangerous climate change.

Currently temperatures have risen 1C since the Industrial Revolution.

Among the placards held by attendees was a sign warning: “There is no Planet B”.

In Canberra, a crowd of about 5000 marched from Parliament House, down the ramp and along Commonwealth Avenue before arriving at the Aboriginal Tent Embassy in front of Old Parliament House.

The crowd chanted “from coal and gas to wind and sun. This power shift has begun” and “we are unstoppable, another world is possible”.

At the tent embassy the group was welcomed by Aboriginal elders who invited the group onto the land.

The ACT Conservation Council’s Phoebe Howe said the march was about celebrating successes as well as advocating for more action.

“Often at these climate marches it can feel like we’re protesting something that’s so hard to change, but the reality is that there is so much climate action already happening right across the world and here in Canberra’s a great example of that,” she said.

“We’re excited to celebrate that and to invite everyone participating today to find ways they can stay involved and keep pushing so that together we can find that global solution.”

In Hobart about 1000 people gathered on the lawns of Parliament House to listen to a series of speakers. Despite the location of the rally, the organisers did not include politicians in the line-up.

Many people carried placards and signs calling for a focus on renewable energy and less of a reliance on fossil fuels.

The Greens were present and called for more action from Tasmania’s state Liberal Government on clarifying its climate change policy.

Wildlife also featured strongly, with participants dressed as parrots and Tasmanian devils to draw attention to the plight of endangered species.

The crowd fell silent for a minute at the start of the rally, in tribute to the victims of the Paris terror attacks.

In Adelaide, a crowd marched from the Torrens Parade ground in the CBD to Victoria Square.

Organisers say around 6000 people have attended the rally in Adelaide, making it the largest ever in South Australia on the issue.

The march came as the South Australian Government released a plan to make Adelaide the “world’s first carbon neutral city”.

During the rally, another much-smaller group of about 30 marched the opposite direction calling for a stop to child abuse and more action on the issue from the SA Government.

The goal is to limit average global warming to 2C or less over pre-Industrial Revolution levels by curbing fossil fuel emissions blamed for climate change.

If they fail, scientists warn the world may become increasingly inhospitable to human life, with superstorms, drought and rising sea levels that swamp vast areas of land.

On the eve of the protests, French president Francois Hollande warned of the obstacles ahead for the 195 nations that will be represented at the talks following more than two decades of bickering.

“Man is the worst enemy of man. We can see it with terrorism,” said Mr Hollande, after leading ceremonies in Paris to mourn the victims of the deadly November 13 bombing and shooting attacks that sowed terror in the French capital.

“But we can say the same when it comes to climate. Human beings are destroying nature, damaging the environment. It is therefore for human beings to face up to their responsibilities for the good of future generations.”

UN secretary-general Ban Ki-moon said he was optimistic of success in the talks, due to end on December 11, but emphasised all sides must be prepared to compromise.

“I am urging the world leaders that they must agree on the middle ground, there is no such perfect agreement in this world,” he said.