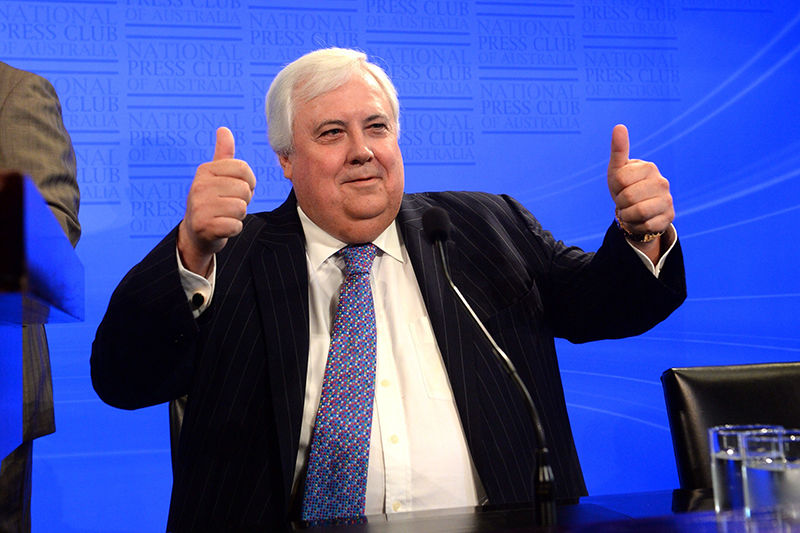 “I would say that the 2014 budget, the stand we took in the Senate that made a difference for this country, certainly played a view in the downfall of the Abbott government,” he told the ABC.

Mr Palmer’s party has since lost two senators, with senators Jacqui Lambie and Glenn Lazarus leaving to form their own political parties, as well as the guaranteed support of Senator Ricky Muir.

The ousting of Mr Abbott has recently returned to the headlines following revelations a member of Julie Bishop’s staff attended a meeting that plotted the former prime minister’s downfall.

However, Senior Labor frontbencher Anthony Albanese says there is nothing to suggest Malcolm Turnbull has changed since his failure as leader of the Liberals in opposition.

Mr Turnbull is enjoying strong support since toppling Mr Abbott as PM, putting the Coalition in a winning position for next year’s federal election.

“What we’re seeing is an immediate lift in the polls for Malcolm Turnbull. It’s a shiny new thing for people to look at,” Mr Albanese told Network Ten on Sunday.

“But when people look at the substance, I think we’ll see a very different outcome.”

But Mr Palmer believes Mr Turnbull is “going very well”, praising the prime minister’s stance on Syria and the ongoing fight against terrorism.

The new Prime Minister, meanwhile, returns from a whirlwind of international meetings dominated by the Paris terrorist attacks for the last parliamentary sitting fortnight of the year.

In just over a week since the nation’s politicians were last in Canberra, the PM has travelled to Indonesia, Germany, Turkey, the Philippines and Malaysia where terrorism overshadowed the usually economic-focused agendas.

While Mr Turnbull continues to enjoy strong support since toppling Mr Abbott, how to deal with the threat from Islamic State is the first big test for his leadership, moreso from within his own party.

He will be able to report back on the international approach to beating Islamic State but Mr Abbott has called on the SAS to intervene in Syria with “boots on the ground”.

Justice Minister Michael Keenan isn’t surprised Mr Abbott wants to have his “two cents’ worth” in a debate that will likely take up the parliamentary agenda. Australia is already the second largest contributor to the US-led coalition seeking to drive Islamic State out of Iraq and Syria.

“If there is further that we can do in conjunction with international partners then obviously we will seriously look at that,” Mr Keenan told Sky News on Sunday.

Debate will resume on Monday on draft laws that will strip dual nationals suspected of terrorism of their Australian citizenship.

And the government will likely have to fend off criticism for allowing Darwin’s port to be leased to a Chinese company while blocking the sale of Australia’s largest private landowner S.Linden to multiple international bidders because it was determined to be against the national interest.

The huge landowner was trying to sell off land that includes its Anna Creek station, of which around 50 per cent of its pastoral lease is located in the Woomera Prohibited Area in South Australia.

Mr Turnbull said it was called a prohibited area because it was used for weapons testing and obviously raised national security issues.

Labor and others have argued that Darwin’s port is also a strategic asset for both Australia and the US because it is used during joint military exercises.