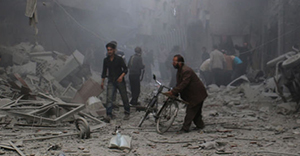 Bombing terrorists may only make them stronger: expert

Armies of the Western world hope that dropping bombs will help, but it could be a losing fight. And no-one wants another war Read more

This is how much sex you should be having

Some couples have it once a day, others once every FOURTEEN YEARS. A new study says there’s a perfect amount of naughtiness to keep everyone happy Read more

Aussie consumers will save millions a year if the Reserve Bank intervenes to outlaw charges on transactions. Will it come to our rescue? Read more

Soaring temperatures over the weekend will create ideal conditions for bushfire. We wrap the weekend weather and fire risks near you Read more

Finally, some good news about the environment

Years of scaremongering have made climate change action seem too difficult and expensive. But Australia has proven this false Read more

After TND reported on Telstra raising the cost of paper bills, one man tried to get a refund. It became a customer service nightmare Read more

Fallout 4 is a stunning video game you have to play

Patient fans have been rewarded with a post-Apocalyptic, mutant-slaying feast. It’s a role-playing game full of eye candy Read more

Why the discovery of this illegal machine gun is good news

Don’t be fooled. The seizure of this rapid-firing sub-machine gun is not just a coup for police. It actually reveals something reassuring Read more

Stop ruining your wine! Start serving it at the right temperature

We troglodytes Down Under have been accused of atrocious wines against sommeliery. Are you breaking the rules? Read more

A new discovery suggests there could be a little bit of these one-metre tall, island dwelling pre-humans in all of us Read more

‘I am not afraid’: The modern unknown soldier risks it all in Ukraine
Energy market reform will be a big boost for emissions reductions: Chris Bowen
Greens sign up for Labor’s looming jobs-and-skills summit as Liberals stick with boycott
Joe Biden’s $430b green victory for the environment
China cementing its Thailand ties with joint military exercises
NRL: Titans frantic to end 10-game losing streak as Manly showdown looms
Why you shouldn’t worry about this machine gun
Today's Stories