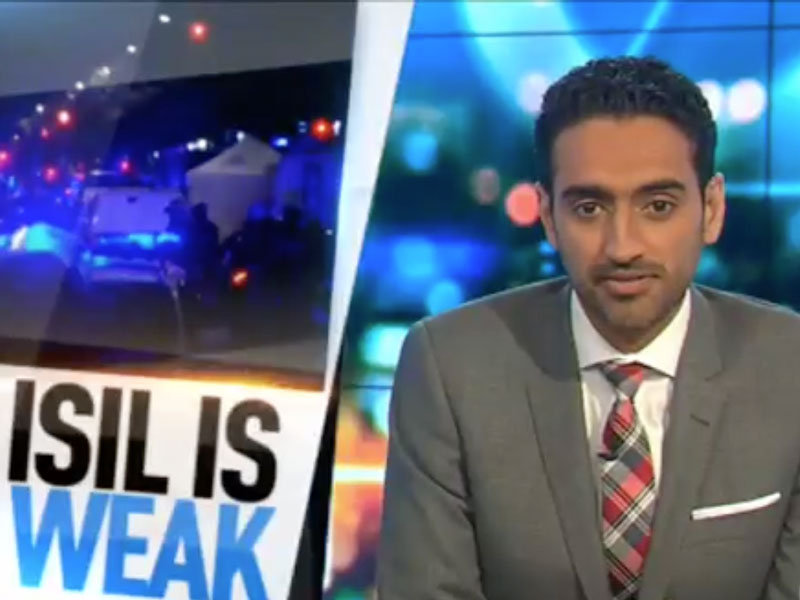 Channel 10’s Waleed Aly has appealed to the public not to allow themselves to be “manipulated” by the divisive strategies employed by Islamic State.

It followed the group’s claim of responsibility for attacks in Paris that claimed at least 129 lives and injured a further 350 people.

Aly, a prominent media commentator, lawyer and academic as well as an adherent to Islam, called for Australian politicians and Muslim leaders to cease preaching “hate” and instead encourage unity to defeat the barbaric terror organisation, which is also known as Islamic State of Iraq and the Levant (ISIL).

“ISIL is weak,” he declared at the opening of the five-minute segment on The Project.

“It is that black and white. Again we know this because they told us.”

He said the group wanted to “appear so powerful” to avert from the fact “they would quickly be crushed if they ever faced a proper Army on a battlefield”.

Calls for troops on the ground in Syria were were a common topic of conversation with world leaders following the attacks in Paris on Friday night.

US President Barack Obama ruled out a military intervention in the Middle East country at the G20 summit in Turkey on Monday, while Prime Minister Malcolm Turnbull said the most effective “boots on the ground” would be Syrian forces.

Aly said IS was looking to send the world into another global conflict and incite societal division.

IS’ strategy to divide and conquer would only be successful if the international community allowed them to make Muslims the enemy of the West, giving Islamic people nowhere to turn but the “evil organisation”.

“That was exactly their strategy in Iraq,” he said, “and now they want it to go global.”

“Saying that out loud, it is both dumbfounding in its stupidity and bloodcurdling in its barbarity.

“We are all feeling a million raging emotions right now. I am angry at these terrorists. I am sickened by the violence and I am crushed for the families that have been left behind, but, you know what, I will not be manipulated.

“We all need to come together. I know how that sounds. I know it is a cliche, but it is also true because it is exactly what ISIL doesn’t want.”

See the full video below

Waleed talks about how we can stop ISIL #TheProjectTV Written by Waleed & @twhittyer https://t.co/tX6mRNXZK1