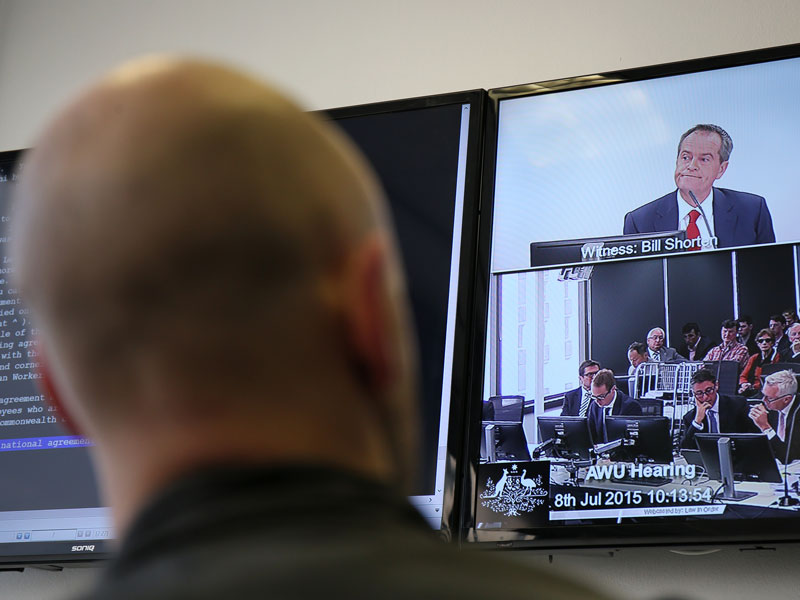 Mark Dreyfus QC is not the only senior lawyer who takes a dim view of royal commissions or similarly constructed judicial inquiries.

“It’s not like a court, it is not subject to the ordinary kind of rules that a court would be subject to and it’s a real concern,” he said.

Defenders of commissions say that they can more easily get to the truth and expose malfeasance in a way the criminal justice system can’t.

The Fitzgerald Royal Commission in Queensland exposed systemic corruption in the Sunshine State that led to high level and successful prosecutions and to a wholesale change of culture in that state.

The most potent weapon these commissions have is the ability to shine a very bright light on very dark places. But they can do this without any heed to natural justice. That is, laying out the case against a person and then giving them the chance to answer it or test it.

All done, these days, live on television.

‘Gotcha’ is a dramatic and media-exciting technique. The pity is it can, and does, unfairly destroy reputations.

The presumption is governments that set up these inquiries do so in the national interest and not in their own partisan political interest. Labor has been convinced from the outset this did not apply to the now-dumped Prime Minister Tony Abbott.

The $25 million ‘Pink Batts’ Royal Commission has sunk without trace. Its purpose was to utterly humiliate Mr Abbott’s political opponents in the Rudd Labor government.

The $60-$80 million TURC is not so clear-cut – but not by much. The terms of reference went out of their way to ensnare two Labor leaders, one of them a former prime minister.

Julia Gillard’s alleged involvement in an Australian Workers’ Union slush fund she helped her then-boyfriend set up went back almost two decades, predating her parliamentary career. It had been investigated by police in two states.

The commission found no criminal behaviour on her part. But never mind, the former Labor prime minister had been in the dock guilty until proven innocent.

The current Labor leader Bill Shorten’s history with the union is more recent. He ran the AWU at the state and federal level before entering parliament.

Last Friday ‘in the dead of night’, the royal commission revealed there would be no submission “that Mr Bill Shorten may have engaged in any criminal or unlawful conduct”.

Mr Shorten’s worst fears weren’t realised. He is still angry he was put on the witness stand without details of the allegations against him being made available in a timely way.

But not so lucky was his successor at the union, Caesar Melham. Now a state Labor MP, he could face criminal charges of corrupt payments from companies. Executives at these businesses could similarly be charged.

These preliminary findings and evidence of thuggery and corruption in the construction division of the Construction, Forestry, Mining and Energy Union is for many justification enough for the royal commission.

But Labor’s Brendan O’Connor, whose brother heads the CFMEU, makes a strong case for a more effective use of taxpayers’ money to achieve the same results. As a former Home Affairs Minister he had responsibility for the Australian Crimes Commission.

He says that the commission has coercive powers and a special taskforce set up by it with even a tenth of the funding made available to the royal commission could do the job.

Of course, the problem with that is taskforce investigations are done out of the spotlight. They don’t hit the headlines until charges are laid.

That simply didn’t suit. A kangaroo court smearing your opponents was a much more attractive proposition.