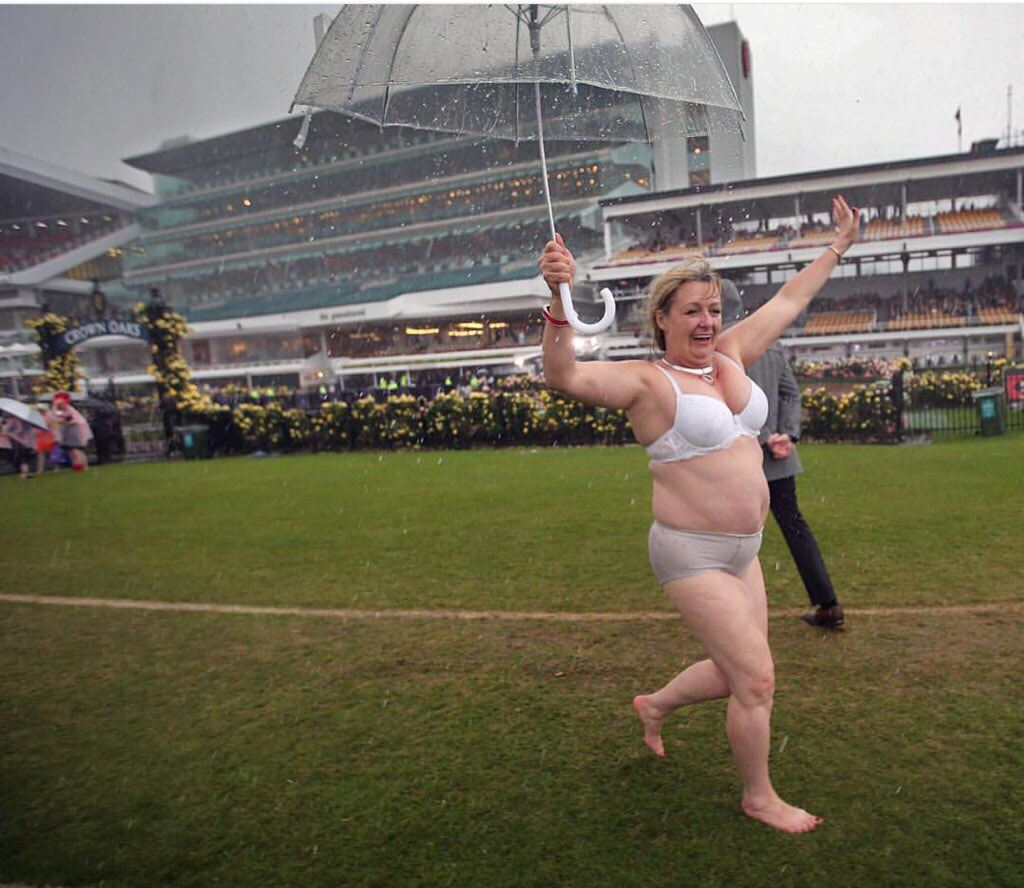 A $10 bet at during a wet and soggy Oaks Day in Melbourne has turned a half-naked streaking grandmother into a national sensation.

Sue Veering-Bentley, a 52-year-old mental health support worker, was at the Flemington race day with friends when a ferocious storm rolled in, drenching race-goers and delaying the races.

During the heavy downpour, she took of her dress and ran up and down the grass in her underwear, in full view of onlookers, all the while clutching an umbrella.

Sue told Fairfax Radio she regularly attended Oaks Day, but this year was wet and miserable, so when her friend Debbie offered her $10 to strip out of her wet frock, she didn’t look back.

While the horses were being taken back to their stalls during the storm, it was Sue making a mad 25-metre gallop that captured the attention of racegoers.

The footage went viral on social media and attracted reactions which ranged from disgusted and horrified, to supportive and encouraging.

On Friday morning, radio host Neil Mitchell asked Sue if she was embarrassed about the incident.

“We go every year and it’s always fun, but it was wet and it was miserable, so I thought ‘let’s embrace it’.

Mr Mitchell asked the mother-of-five how she felt about the footage going viral.

Some social media users had commented on her choice of underwear, which was off-white in colour.

“I had my ‘Bridget Jones’ on,” Sue joked, referring to the movie Bridget Jones’ Diary, where the lead character gets caught in an uncompromising position while wearing unattractive, oversized underwear.

“Hello, there’s a good message, when your mother tells you to wear good undies, she was right, wasn’t she?”

“It was funny, it was just a bit of fun. I can’t believe it went so mental.”

She agreed with Mr Mitchell saying she was a free-spirit.

“The world is far too serious now,” Sue said.

She also joked about getting a sponsorship deal with clothing and underwear company Bonds.

She told Fairfax Radio that she didn’t care what people thought or said about her stunt.

Sue’s friend, Debbie, who offered her $10 to strip off also spoke to the radio station, and revealed she hadn’t yet paid her dues.

She also defended her friend, after people had come out and didn’t see the funny side side to the streak.

“She was complaining how wet her dress was and that it was see-through, so I dared her to do a nudie run,” Debbie said.

“I haven’t laughed so much in forever. It was brilliant. It was the best $10 I’ve never spent, because I haven’t paid her.

“I think it was a lot of fun, there is way too much drama and trouble going on in the world, and if people can’t have a good laugh at something.”

In another bizarre race day incident, this time on Melbourne Cup Day, a female race-goer pushed a Victoria Police acting superintendent over into a bush, which also went viral on social media.

She was arrested and later charged over the incident, which she said she was remorseful for.

There were mixed reactions on social media about Sue’s underwear stunt – which divided the nation.

There was rain, there was thunder, there was sunshine & someone running around in Bridget Jones underwear. Oaks Day – you’ve got it all — Tracey Kendall (@Girl_GoesRacing) November 5, 2015

“i had my bridget jones’ on – oh dear” – the lady running around in her underwear in the rain at oaks day on @3AWNeilMitchell. good on her! — Catherine Sweeney (@sweens85) November 5, 2015

@3AW693 Hey @BondsAus Give that woman a contract to advert #nannapants !

@3AW693 people having issue with her doing her thing says more about them than about Sue. What sad joyless people they must be. — Camille Heckley (@Cami181) November 5, 2015

Oaks Day Sue B. is a star, for being a real woman attempting to lift a crappy day to new hysterical heights for her friends. HOORAY! 😂 LUV.💖 — Sue-anne (@mesueanne) November 6, 2015

@3AW693 behavior of women at this spring carnival has been disgraceful — Justin (@Juzmon) November 5, 2015

@3AW693 can’t we just have one Australian event where bogans don’t take the limelight for whatever reason?! #Straya — David Stevens (@TheDavidStevens) November 5, 2015